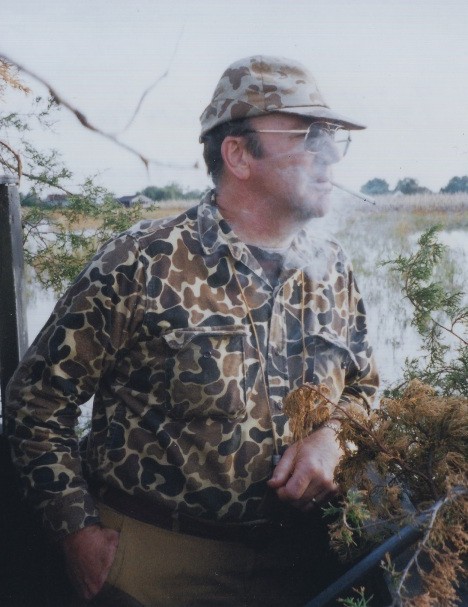 William Clift (“Bill”) Rowland, Jr., 80, left us on December 27, 2021 due to complications from Parkinson’s Disease for his last hunting trip to that great duck blind in the sky.  From his beginnings, education, marriages, rise in business, and life outdoors, Bill lived a full life his way.

Born to Elizabeth Hammond Rowland and William Clift Rowland Sr., in Pittsburgh, PA September 12, 1941 as the eldest of three sons, the family moved to Swarthmore, PA in 1951, defining Bill thereafter as a lifelong Swarthmorean.  Let’s say Bill enjoyed a robust youth, beginning his love of the outdoors through adventures with Snake (Ron Taylor) and brothers Jim and Bob, then graduating Swarthmore High School where he played football, graduating in 1959.

Then to University of Pennsylvania, graduating in 1963 with a B.S. in Business and then to University of Michigan where he earned a MBA, further defining Bill as a lifelong advocate of education.  Bill enjoyed himself at college as a member of Phi Sigma Kappa fraternity, Glee Club and playing Penn lacrosse.  Proceeding from education to his career start in a management development program with General Electric, Bill started his family marrying his high school sweetheart Louise Howe in 1963, with the births of his sons Bill III (1966) and Rick (1968) to follow.

American Appliance itself was born in 1968, to which Bill grew over the next 35 years to 30 locations through a mix of drive, shrewdness, risk and luck that was uniquely Bill Rowland.  He was a strong leader and risk taker, aggressive in his methods, fair, and loyal to his employees.

Bill married Joanne Khoo, whom he’d go on to call the ‘love of his life’ in 1988, with his daughter Christina, “Short Stuff” arriving in 1992.

In addition to his business, and what may define him most, after hunting with fraternity brother Robert (“Skipper”) Scrimgeour beginning in 1972, is his love for the outdoors that he lived through Gone Huntin’ Farm, his farm on the Lower Eastern Shore of Maryland he bought in 1977.  Suffice it to say, over the ensuing 45 years, Bill cultivated a property and experience at Gone Huntin’ Farm that brought together a love of the sporting outdoors, friendships too many to count, camaraderie, and wildlife conservation that will be his legacy.  His hearty, vocal duck call will forever survive him.

Relatives and friends are invited to Bill’s Memorial Service, Saturday, June 4, 2022, at 10:00 AM at Swarthmore Presbyterian Church, 727 Harvard Avenue, Swarthmore, PA  19081.  A Hunter’s Wake at Gone Huntin’ Farm will be determined at a later date, in the bay, marshes, ponds, fields and woods that he loved.

In lieu of flowers, Bill would prefer donations made in his memory to Ducks Unlimited,  https://www.ducks.org/get-involved/memorial-giving  or to the Lower Shore Land Trust,  https://lower-shore-land-trust.networkforgood.com/projects/137188-give-today