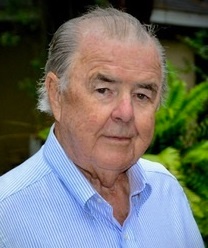 William A. Carson, Jr. (Bill), aged 90, of Marco Island, Florida and Fort Erie, Canada, and formerly of Malvern, Pennsylvania, passed away on April 23, 2022 in Naples, Florida.

Bill was born in 1931 and spent his childhood in Drexel Hill, PA.  He loved the summers, playing ball with his friends and spending many months in Ocean City, and Long Beach Island, NJ.  Bill was a proud graduate of St. Joseph’s Prep (1949) and St. Joseph’s College (1953) in Philadelphia.  After serving in the U.S. Army, he secured a position as an accountant at SouthCo, Inc., a Philadelphia area manufacturing firm.  After serving 39 years he retired as Corporate Comptroller in 1996.

In retirement his greatest joys were gardening, golf, and both world and domestic travel.  However, his greatest love was his family and he was always looking for a reason to celebrate when visiting his children and grandchildren. As such, his favorite time of day was always cocktail hour at 5:00PM. He was an avid follower of St. Joseph’s University sports and all the major sports teams in Philadelphia, especially the Phillies.

In lieu of flowers, memorial contributions may be made in his name to St. Joseph’s Prep, Development Office,1733 W. Girard Ave., Philadelphia, PA 19130.

To order memorial trees or send flowers to the family in memory of William A. "Bill" Carson, Jr., please visit our flower store.