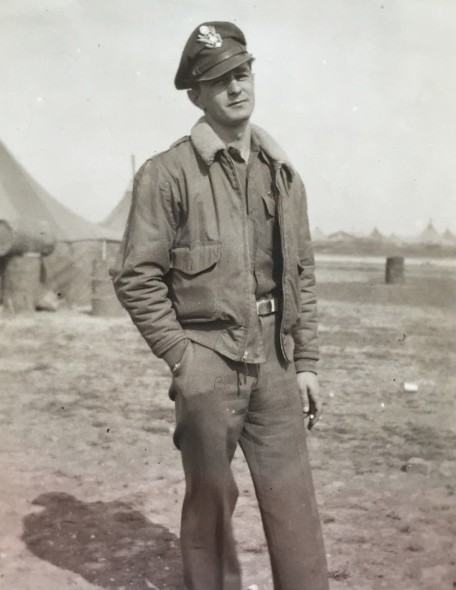 William P. Bonelli, age 100, died peacefully at his home in Radnor, Pennsylvania on May 12, 2021 after a long battle with cancer. Mr. Bonelli was born in Indiana, PA, on March 17, 1921, son of the late Constance Bonelli. William was preceded in death by his wife of 50 years, Geraldine.

It is funny how something as simple as a cartoon can influence the entire direction of one’s life. But that is exactly what happened to Bill Bonelli in 1940. The Indiana, Pennsylvania teenager saw a political cartoon in a newspaper with three flowers labeled Hirohito, Hitler, and Mussolini. The caption read: “Growing.” “It was pretty obvious to me what was going on,” Bill said, “America was headed to war.” His older brother tried to get him to join the National Guard, but Bill told him to tell his commanding officer “I’m not going to carry a rifle in this coming war.” At twenty years of age, after walking the streets for several days with only a dime in his pocket, he walked into a local recruiting office and said, “I’ll sign up, if you can get me near airplanes.” The Sergeant on duty spent several hours on the phone and finally informed him that there was nothing stateside, he’d have to go to Hawaii. “I’ll take it,” Bill replied. Bill enlisted in the U.S. Army Air Corp and was sent to Hawaii to train as an aircraft mechanic. On Sunday morning, December 7, while returning to base for breakfast after a night of R & R on the on the other side of Oahu, he looked up and saw three planes that he did not readily recognize only to wonder aloud whose planes those were and exclaimed “You know, we could be at war.” A few minutes later and it was evident, we were at war. Bill could see the ships around Ford Island Pearl Harbor being pummeled by the Japanese Zeros and soon found himself being targeted as he tried to cross the tarmac at Hickam Field. In a first-person account of the morning, he recalled, “By 8:30 a.m. I had acquired a rifle, two belts of bullets, and a handgun with several clips of bullets. I fired 8 shots with my rifle and emptied a clip from my pistol at four different Zeros, with no immediate indication of a hit.” In 1942 his squadron was deployed to Nadi in the Fiji Islands as support for the bombing sorties which were targeting Japanese strongholds. Despite his skill in maintaining aircraft, Bill always wanted to become a pilot. His applications for Flying Cadets had gained no traction while he was at Pearl Harbor, but a chance encounter, with an African American Warrant Officer in the Coast Artillery, resulted in his application being placed “on top”. In the spring of 1943 Bill found himself on board the Bosch Fontaine, a Dutch freighter, bound for Los Angeles and his chance to become a pilot. He got his wings and commission on February 8, 1944. “A whole new life opened up to me,” Bill recalled. “I trained on the B-17 Flying Fortress. How sweet it is!” Eventually he acquired his own flight crew of 10 and was sent to Foggia, Italy. Assigned to the 15th Air Force, he flew 29 combat missions in Europe, 19 as a squadron leader and one as group leader. He returned to the United States in 1945 as a captain. Back home Bill held assignments as Maintenance officer, Flight Operations Officer, Material Officer, Chief of Officer Maintenance Training, and Chief of Aircraft Maintenance Division, Technical Training for Headquarters Air Training Command. He also served as an F-84F maintenance advisor to the Dutch Air Forces. In 1955, Mr. Bonelli was assigned to the 81st Fighter Bomber Wing in England where he qualified as a fighter-bomber pilot at the age of 34. Among Bill’s many awards and decorations are the Distinguished Flying Cross, 4 Air Medals, European-African Middle East medal, Asiatic-Pacific medal with 4 battle stars, and the Air Force Meritorious Service and Commendation medals. Bill was qualified as a pilot in helicopters and more than 20 different fixed-wing aircraft ranging from propeller driven to jet fighters.

While he was working in Florida in the mid-1940s Bill met a young accountant on base, Geraldine, better known as “Geri”. They were married about a year later and enjoyed more than 50 years together before Geri died in 2004. Upon retirement from the military in 1960, Bill began the second portion of his life-long service to America with the Federal Aviation Administration (FAA) as an Airspace System Inspection Pilot (ASIP) and Instrument Procedures Specialist. He held assignments at the Minneapolis-St. Paul Flight Inspection Field Office. From 1963-1969 Bill served as an FAA Academy instructor in Oklahoma City, OK. Following that he was assigned to the Los Angeles Flight Inspection Field Office. In 1977 he moved up to the Aviation Standards National Field Office in Oklahoma City to serve with the Aviation Safety Inspector Program. Bill retired from the FAA in 1993 and in 2017 he moved to Radnor Pennsylvania to live with his daughter and son-in-law. The story of Bill’s life is currently being made into a documentary film entitled “Burden of Memory”. It will be released by end of 2021. “I guess I was just in the right place at the right time, getting to do all the things I have done, and enjoying them, like I did,” Bill mused. “But I also think you make your own luck.”

Bill is survived by his daughter and son-in-law Geralee and Billy Wood of Radnor Pennsylvania. He also leaves behind two grandsons Nathaniel Wood and William Wood, and two great-grandsons: Henry and Holden.

Relatives and friends are invited to Visitation on Saturday, May 22nd from 11:00 AM – 1:00 PM at the Donohue Funeral Home, 366 West Lancaster Avenue, Wayne, PA 19087. Interment will be in Oklahoma.

In lieu of flowers, contributions in Bill's memory to Wounded Warrior Project, PO Box 758516, Topeka, KS 66675 www.woundedwarriorproject.org would be appreciated.

To order memorial trees or send flowers to the family in memory of William Bonelli, please visit our flower store.