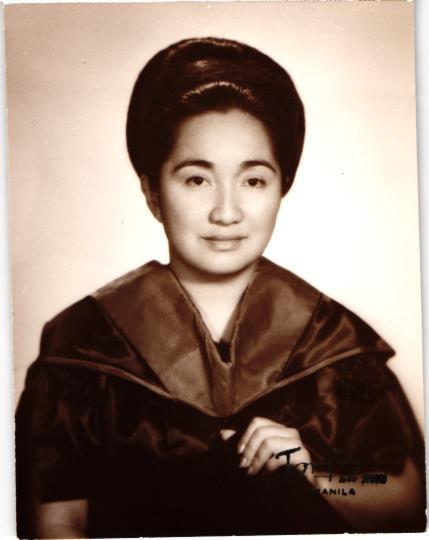 Violeta Mendoza Aguila was born in 1935 to Juanito Casanova and Belen Mercado in Taal, Batangas, Philippines.

As Juanito and Belen were very young, Violeta was raised with the assistant of her paternal grandmother and aunt.  Her grandmother was perhaps the most influential person in her life.  Violeta believed that her high self esteem and over confidence was developed by her grandmother.

When Violeta entered college, she studied pre-law before transferring to pre-med with minors and concentrations in mathematics, chemistry and physics.  After undergrad she attended the first year of medical school but was unable to complete her medical studies because she had to go to work to help her parents support the family.

Violeta was teaching by the age of 19 and was a principal at the age of 25.  She became the Dean of Liberal Arts at Rizal College, where she met her future husband, Romualdo Aguila, who was the Auditor of Rizal College. After a short courtship, Romualdo asked Violeta’s parents for her hand in marriage.  They were married on October 18, 1965.

Violeta and Romualdo had three children: Anna Maria Rovi, Janus Romualdo and C. Jason.  Violeta raised her family, continued her career and owned an embroidery business in the Philippines.

In 1971, Violeta immigrated to the United States with her family and started a new life.  She owned and operated the Oak Lane Shop in Cheltenham before going back to teaching.  She taught at Chester Upland School District and was an adjunct professor at the former Glassboro State College.  Violeta received her Principal Certificate from Villanova University and Superintendent of Schools Certificate from Temple University.  Ultimately, she became a Principal and the Director of Federal Programs.  She was very proud of the career she created late in her life in the United States.  Violeta also developed an interest in real estate and owned and managed multiple rental units.

In her later years, Violeta enjoyed her family and friends.  Going to the casinos was her ultimate past time.  Violeta lived independently with her husband until her death.

Violeta will be remembered for tenacity to succeed and passion for her family. She was full of life and personality.

She leaves behind her husband, children, grandchildren, and siblings.

To order memorial trees or send flowers to the family in memory of Violeta Mendoza Aguila, please visit our flower store.