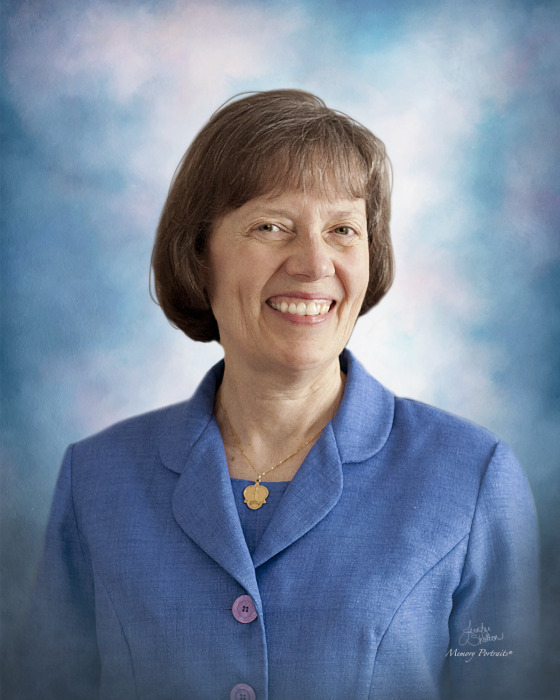 Eileen Moughan, SHCJ, a Sister of the Holy Child Jesus for 52 years, died peacefully on Sunday, April 11, 2021, at Holy Child Center in Rosemont, Pennsylvania. She was 73.

Sister Eileen had a patient, compassionate, and gentle spirit. She ministered lovingly to all and was most generous with her time. With her nursing background, Sister Eileen had a gift for diagnosing medical conditions and was a trusted source of support. As a Province Leadership Team member, her wisdom, intelligence, and listening heart were deeply appreciated. Wherever Sister Eileen traveled or served, she was always a proud Philadelphian. She will be sorely missed.

Born and raised in Philadelphia, Pennsylvania, Sister Eileen entered the Society of the Holy Child Jesus after graduating from West Philadelphia Catholic Girls' High School in 1965. She made her final vows in 1973 and became well-known by her religious name, Sister Marian Theresa. From 1969-1976, Sister Eileen taught in several schools including Annunciation School in Washington, D.C. (1969-70 and 1971-73), Assumption School in Philadelphia (1970-71), and Holy Child School at Rosemont in Rosemont, Pennsylvania (1973-76).

In 1976, her appointment to Santiago, Chile, was a happy surprise. For the next three years, Sister Eileen lived in Lo Barnechea, Chile, where she used her talents in education and parish work during a time of upheaval and suffering for the country. She once described this experience as one of the most blessed experiences of her life. In 1981, Sister Eileen was awarded a Master of Science Degree in the Family Nurse Practitioner Program at Pace University in New York. She then interned at Covenant House in New York and was later appointed Director of Nursing at Holy Child Center in Rosemont, Pennsylvania. Nursing was a natural fit for Sister Eileen's caring gifts, which she exercised generously at Holy Child Center and as a visiting nurse in Philadelphia. Starting in 1986, Sister Eileen alternated between nursing and administrative responsibilities when she was called to be a member of four Province Leadership Teams. As a member of these teams, she served on boards and national committees, including as a consultant for retirement and health ethics. Her service on the Province Leadership Teams spanned 19 years, with her last term ending in 2017.

As a Province Leadership Team member, Sister Eileen's visits with Sisters in the United States, Chile, and the Dominican Republic broadened her understanding of life among the Sisters. She was also introduced to the realities of the European and African Provinces. Sister Eileen shared, "I am grateful to have been called to be part of the Society during these years of grace and challenge." Since 2017, Sister Eileen had shared her time and gifts assisting Holy Child Sisters with their medical needs. She also volunteered at educational and social justice organizations, including Hebrew Immigration Aid Society, which helps people of all faiths to resettle in the United States.

Sister Eileen received a Bachelor of Arts Degree from Mercy College in Dobbs Ferry, New York, in 1976, and a Master of Science Degree in the Family Nurse Practitioner Program at Pace University in New York City in 1981.

She joins her parents Richard Joseph and Helen (Heppard) Moughan. She is survived by many cousins.

In lieu of flowers, memorial donations may be sent to the Society of the Holy Child Jesus – American Province, 1341 Montgomery Avenue, Rosemont, PA 19010, or can be made online at www.shcj.org/american/donate or by email to slovascio@shcj.org

To order memorial trees or send flowers to the family in memory of Sr. Eileen Moughan, SHCJ, please visit our flower store.