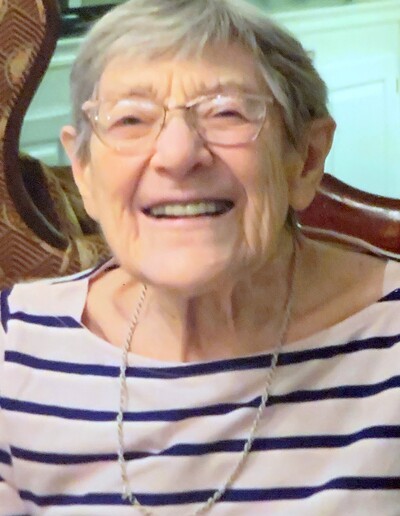 Owens, Shirley Lee, passed away on Thursday, April 22, 2021, in St. Louis, Missouri after a brief illness. She was 95 years young.

Born in Kansas City, MO on July 3, 1925 to the late Herman and Marguerite Oelschlaeger, Shirley was the beloved wife of Clifford W. Owens, who preceded her in death for 69 years.

Shirley attended Kansas City public schools and graduated from the University of Kansas with a degree in Occupational Therapy. After marrying Clifford Wayne Owens in 1946, she devoted her life to family and making a home for their seven children as her husband's career took them to six states through eighteen moves.

Shirley and Clifford settled in Westtown, PA in 1981 to the home they would eventually spend more time than any other place. They loved getting to travel to Europe and Mexico and making friends around the world. During retirement they spent their winters in McAllen, TX with friends and took every opportunity to travel, learn, live and grow. They moved to St. Louis in July 2015.

She leaves behind countless friends and neighbors who loved and cherished her gentle ways. Shirley was known for her kindness and humility; she rarely got angry and never had an unkind word for anyone. She was a devout Catholic who practiced the principal tenant of her faith - love thy neighbor as thyself. She was an active member of the Prayer Shawl Ministry of St. Simon and Jude Church in Westtown. She also volunteered many hours at the Melmark School in Newtown Square, PA. She and Clifford delighted countless children with their clown routines as volunteers at Paoli Hospital.

Shirley was known for her crab cakes and cheesecake. To this day, none of her kids or grandkids have found a better version than hers. She will live in the hearts of her seven children and their spouses, and her grandchildren and great grandchildren who remember her love, hugs, kisses and smile. They will cherish the memories of the many family gatherings, meals, holidays and memories served with great wine at her beloved house in Westtown. The ”El Blastos” as Clifford used to call them will live on alongside her smile, her love and her kindness for her family and all who knew and loved her always. Our hearts are deeply saddened, but we take comfort in knowing she lived a wonderful life, a long life, and is now reunited with her love Clifford.

In lieu of flowers, the family asks that donations be made to the charity of your choice or that you simply give an act of kindness in her memory.

To order memorial trees or send flowers to the family in memory of Shirley Owens, please visit our flower store.