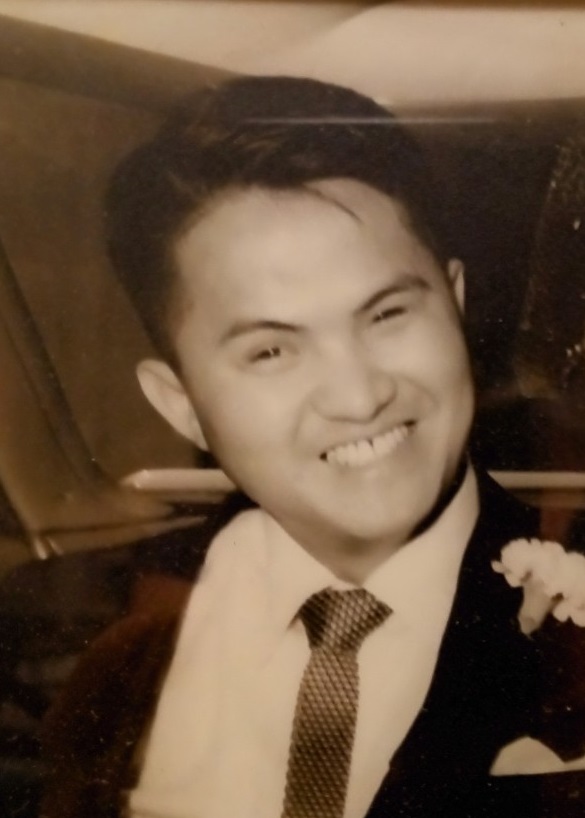 Sebastian M. Demanop, age 93, of Philadelphia, PA, formerly of Havertown, PA, passed away on June 8, 2022.  He was the son of the late Lai and Kimeng Demanop.

Sebastian was born on June 10, 1928, in a small village in Thailand. He passed away two days shy of his 94th birthday. His remarkable journey from Thailand to Philadelphia was built on his hard work ethic, life experience, and faith.

The youngest of six siblings, Sebastian was born with limited sight, which led him to study at a special school for the blind during the Japanese occupation of Thailand. He was an amazing student and mastered Japanese, enabling him to be a translator between the Japanese army and Thailand. In his younger years, he taught himself to play the piano and would play for the Japanese soldiers. He and his friends enjoyed music greatly and he loved to listen to classical music and composers such as Mozart, Hayden, and Chopin. In one story he shared, Sebastian had a forbidden radio at the school and learned to sing/play the song “Blue Skies”, by Ella Fitzgerald. He and his friends had to bury the radio behind the outhouse so that they wouldn’t be found out by the soldiers.

Sebastian was a top student at the school for the blind in Thailand. One of his teachers had attended Overbrook School for the Blind in Philadelphia. This teacher encouraged him to enter an essay competition, through which he won a full scholarship to Overbrook! The wife of the Prime Minister of Thailand, who lived next to the school, obtained a free plane ticket for him to Switzerland. After overcoming a bout of TB, he finally arrived in the States, with very little money in his pockets. Continuing to excel as a student, he graduated and obtained scholarships to continue his education at the University of Pennsylvania, studying Psychology, and then the University of Delaware, for his Masters, where he was a classmate of President Joe Biden.

While at U Penn, he met his wife, Theresa, when both of them, as students, were housed at Overbrook. They were friends for five years, a romance slowly growing. They were married at St. Peter’s Cathedral in Wilmington, DE, on August 8, 1960, settling in Drexel Hill and later, in Havertown. Theresa and Sebastian enjoyed a honeymoon in Wildwood, New Jersey, which would be one of many trips they would take over the years together.

After his graduate education, Sebastian worked for the Delaware Commissioner for the Blind and the PA Division for Visual Services in Philadelphia. He greatly enjoyed advocating for citizens that were seeking accommodations related to their sight. One person he advocated for was able to work for the Federal Department of Defense. Sebastian received many awards over the years for his service. He retired in 1991 at 63 years old.

Theresa and Sebastian traveled the world, aided by the fact that Sebastian spoke multiple languages, including French, Japanese, Thai, English, and a Chinese dialect. They traveled to Mexico, Spain, Canary Islands, Nova Scotia, Prince Edward Island, the Caribbean, Thailand, and several US states. Sebastian enjoyed sampling food in all of these locations, but his favorite food was spicy Thai food. They both had a love of bowling and were involved with the Blind Bowling League for 40 years.

Sebastian kept in touch with his siblings, who all remained in Thailand over the years – in particular his sister, brother, and his nephew. Sebastian’s nephew visited him in Havertown, and he was very happy to visit his extended family through the years.

In his retirement, Sebastian enjoyed continuing his hobbies, like reading newspapers, listening to the radio, and enjoying sports, especially Phillies and Eagles games. He had drafted an autobiography at one time, which he titled “Look to Heaven”, because he believed that “God always provides”. His story of hard work, intellect, immigration, overcoming challenges, and experiencing fulfilling relationships has been an inspiration to all who knew him.

The family has requested that masks be worn to the Visitation, Funeral Mass and Cemetery.

To order memorial trees or send flowers to the family in memory of Sebastian Michael Demanop, please visit our flower store.
Send a Sympathy Card