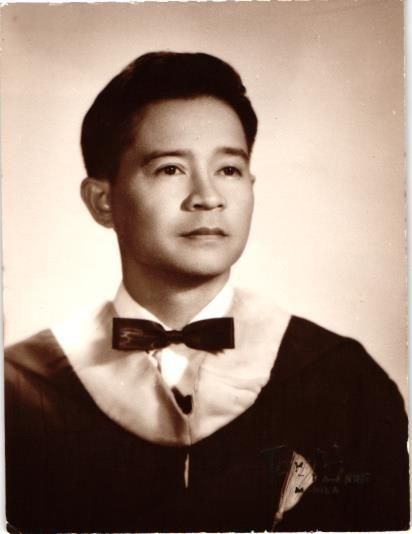 Romualdo Catangay Aguila was born in 1927 to Juana Catangay Aguila and Geronimo Aguila in Cuenca, Batanagas, Philippines.  He had three sisters, Basilia Aguila LaRosa, Primativa Aguila Batalon and Lucia Aguila.  They are all deceased.

When Romualdo (Mando) was 5 years old, his father died. His mother struggled to raise a family on her own, so she allowed Mando to be adopted by Dr. Roman Montenegro and his wife, Tibursia Manadanas Montenegro. Tubursia loved her adopted son. She doted and spoiled him. Although he lived with the Montenegros, Mando kept contact with his birth mother and sisters.

Dr. Montenegro trained Mando as an assistant and worked in the family’s pharmacy. When Mando was 17, Dr. Montenegro died. Mando lost his desire to follow in his adopted father’s footsteps to become a doctor. Instead, he pursued a business degree at the University of the East in Manila. Mando started his career at Radiowealth Philippines and eventually became the Auditor at Rizal College.

Mando was a confirmed bachelor at the age of 39 until he met Violeta Mendoza at Rizal College. After a short courtship, they married on October 18, 1965, in a private ceremony attended by immediate family. They raised three children: Anna Maria Rovi, Janus Romualdo and C. Jason.

Due to the political climate in the Philippines, Mando immigrated to the United States with his family in 1973. He was almost 50 years old, and it was a difficult transition as he had to learn a new language and culture. However, he made this sacrifice so that his children would have a better life. Mando worked as an accountant and helped his wife in different business ventures.

Mando was a caring and giving father. Because he married late in life, he was grateful to see his grandchildren grow up to adulthood. He enjoyed spoiling them.

First and foremost, Mando was a devoted husband to his wife Violeta of 57 years.They lived independently together until her death. He followed her 6 days later.

Mando was a proud Filipino with unwavering integrity and self-awareness. Even at the age of 7, when his adopted father wanted him to change his last name to Montenegro, Mando declined and insisted that he would keep Aguila as his last name. Mando was a man of service, a man of God and a man of prayer.

To order memorial trees or send flowers to the family in memory of Romualdo C. Aguila, please visit our flower store.