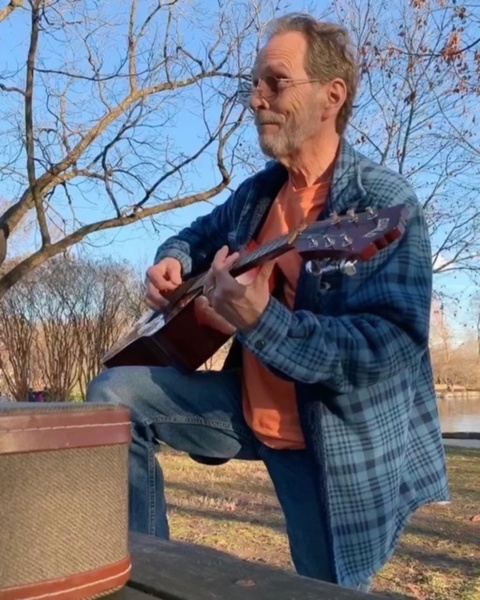 Richard Albert Smith was a beloved husband, dad, “gampa”, brother and friend. He was truly a passionate, calm and musical soul. Rick left this world on Sunday, January 23, 2022 at the age of 69.

Rick was born and raised in Cranford, NJ to Bill and Beverly Smith. He was the youngest sibling to Linda Smith and Larry Smith. He not only considered Linda and Larry as siblings but also best friends. From an early age he found music and was in multiple bands throughout his high school years and beyond. He even ended up sneaking off to Woodstock in August of 1969.

He left home at 18 to start exploring, traveling across the country with his sweet dog Sarah. He lived many places and made some lifelong friends. He spoke mostly about his time in Blacksburg, VA where he worked at Virginia Tech. Those years held a very special place in his heart.

Rick met Leslee while they were both working at Lankenau Hospital. They were married in April, 1987 in Lansdowne, PA and began growing their family a few years later. Rick worked two jobs so that Leslee could stay home with the kids. In the evening he would work at the Acme in Bond shopping center in the bakery (Ashley loved when dad would bring her to work!) and overnight at Bryn Mawr Hospital as a technician. No matter where he was working one thing was clear, he was always caring for others.

Even though Rick worked two jobs, he always found time on the weekends to make memories with his kids. Ashley and John loved riding bikes up to Arlington Cemetery, spending hours climbing trees, sledding at PECO, swinging at the park and dancing around the living room listening to music. It was always about the music. Rick passed his love of music and talent to his two children. Although it’s too early to tell, his granddaughter seems to be getting that music gene as well! Rick became a “gampa” in February, 2020. Luna quickly fell in love with her Gampa’s guitar playing and would often accompany him on the piano.

Rick was diagnosed with Stage 4 Lung Cancer in March, 2021. He fought extremely hard and stayed positive the whole time. He was determined to get back to riding his bike and playing his music. He sadly lost his fight, but his spirit and love for life lives on through his family, friends and his music. Rick is survived by his wife Leslee Smith, daughter Ashley Monachino, son in law Christopher Monachino, granddaughter Luna Monachino, son John Smith, daughter in law Laura Smith, Sister Linda Smith and brother Larry Smith.

A viewing will be held at The Donohue Funeral Home this Thursday, January 27th, located at 8401 West Chester Pike, Upper Darby, PA 19082 from 1130 AM-1:00 PM with burial to follow at the Arlington Cemetery. In lieu of flowers, please make a donation in Ricks’ name to the Delaware SPCA. The address is 455 Stanton Christiana Road, Newark DE 19713 and the website is delspca.org. Rick was a lover to all animals big, small, owned, or lost. He cared for all of them. He especially loved his cat/best friend Chappie, so we know he would be so happy and appreciative to any donation you can make.

To order memorial trees or send flowers to the family in memory of Richard Smith, please visit our flower store.