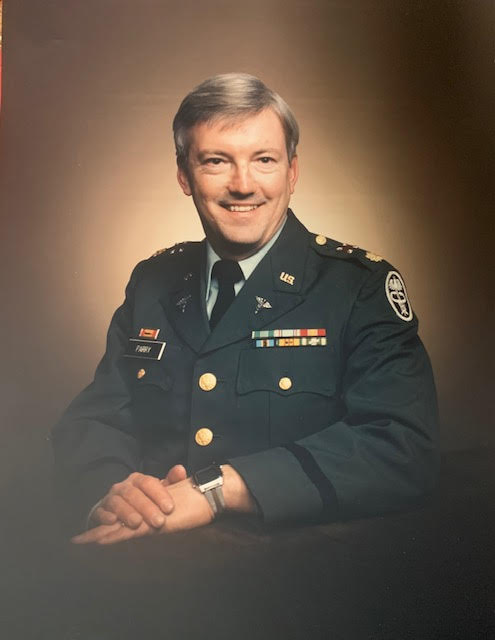 Dick Parry graduated from Northeastern High School in Manchester, PA in 1964. After graduation, he enlisted in the Air Force and served in Vietnam. Dick earned his Bachelor’s degree in Social Science from Penn State in 1972. He continued his education and earned his Master of Social Work from Marywood University, Scranton, PA, in 1975. Upon graduating, Dick was commissioned as a 1LT in the US Army and served as a social work officer until his military retirement in 1991. He continued his career in social work as a Family Advocacy officer in Alaska and then at McGuire AFB, NJ.

More than anything, Dick enjoyed spending time with his family.  His desire to explore each duty station provided for many exciting and memorable family adventures. He loved being outdoors and enjoyed kayaking, biking, tennis, and camping. He loved good food and cooking for his family – his chili, linguini & clam sauce, and meatloaf were family favorites. From a young age he was fascinated by film and video photography. He captured many adventures with family and friends during trips, celebrations, and everyday moments at home. These films and videos will be cherished always by his wife, children, and grandchildren. He made many friends over the years and will be missed by all who knew and loved him. Anyone who knew Dick Parry knew a kind, loving, and gentle man, who never had a harsh word to say and always had a smile on his face.

In lieu of flowers, donations in Dick’s memory may be offered to the Pulmonary Fibrosis Foundation, www.pulmonaryfibrosis.org , PTSD Foundation, https://ptsdusa.org or to a Veterans’ organization of your choice.

To order memorial trees or send flowers to the family in memory of Richard Parry, please visit our flower store.