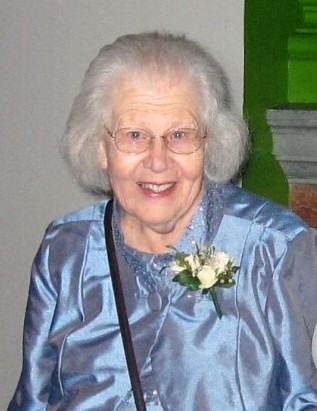 Regina M. (nee Lookabaugh) Glatfelter, age 100, of Upper Darby, PA, passed away on August 25, 2021. Born in Philadelphia, PA, she was the daughter of the late Harry M. and Alice C. (nee Leonard) Lookabaugh.

Regina was a proud graduate of Most Blessed Sacrament, West Catholic High School for Girls, and Immaculata College. Her employment record included Dietician, Chemist for Jack Frost Sugar Co., and Librarian at St. Laurence School and Upper Darby Sellers Library. She also gave piano lessons at St. Laurence School and privately. Regina was an active member of St. Laurence Parish, participating in Sodality, driving for the HOPE program, serving as a Girl Scout leader, and cooking casseroles for St. John’s Hospice. The Catholic Daughters of the Americas was an important part of her life, and she held various offices including Regent and Secretary. She was part of the Singing for Fun and Revelers choral groups, and Club Sashay square dancing group. Regina spent a lot of time volunteering at the Upper Darby Food Bank. During World War II, she was a part of Civil Defense and helped with the periodic Blackout Drills.

Relatives and friends are invited to her Funeral Mass, Thursday, September 2, 2021, 10:30 AM at St. Dorothy Church, 4910 Township Line Rd, Drexel Hill, PA 19026. The Funeral Mass will be livestreamed and can be found on St. Dorothy Parish YouTube, www.youtube.com/channel/UCio1cNnl4DJtpIMqmnyvmbw. Interment SS Peter & Paul Cemetery. The Glatfelter family requests all guests wear facial masks and social distance for the services.

In lieu of flowers, memorial contributions may be made to the Little Sisters of the Poor Holy Family Home, 5300 Chester Avenue, Philadelphia, PA 19143-4929, littlesistersofthepoorphiladelphia.org

To order memorial trees or send flowers to the family in memory of Regina Glatfelter, please visit our flower store.