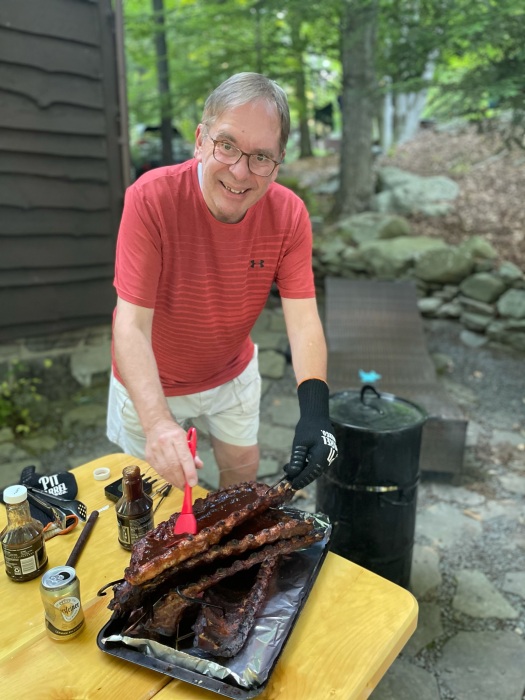 On November 30, 2021, Paul Martin Varzaly, a consummate family man, passed away peacefully at his home at the age of 65.  Paul was born on September 20, 1956 in Scranton, Pennsylvania.  During his youth, he was active in the Boy Scouts and attained the rank of Eagle Scout.  He moved to Philadelphia to attend St. Joseph’s University and graduated in 1978 with a Bachelor’s of Science in Biology.  After graduation, he worked as a researcher at the Children’s Hospital of Philadelphia and later went on to earn a Bachelor’s of Science in Pharmacy from the University of the Sciences in Philadelphia in 1985.  He was employed in various roles over the course of his career as a pharmacist, including Pharmacy Manager, Director of Outpatient Pharmacy for Mercy Fitzgerald Hospital in Upper Darby, Pennsylvania, Home Infusion Pharmacist and Consultant Pharmacist.  He enjoyed educating his patients as well as the dozens of interns he supervised over the course of his career as a pharmacist.

In his later years, he had a second career as a fulfillment associate with Amazon.  He was recognized by the Philadelphia Phillies as a Frontline Hero for his work during the pandemic.  He was honored on Opening Day, and his banner hangs outside Citizens Bank Park.

Above all, Paul was a family man.  Nothing brought him more joy than spending time with his family.  Paul and Janet celebrated their 40th wedding anniversary this past June.  He cherished his role as Gramps, and his grandsons absolutely adored him.  He was a hero to his daughters.    He loved cooking for his family, especially his Sunday sauce, and was an expert griller.  He looked forward to summer vacations at Lake Wallenpaupack and attending the Auto Show with his daughter, Lindsay.  He loved fishing and shared that love with his sons-in-law and grandson, John.  He shared a special bond with his four-legged family members, Badger and Charlie, and was loved by all family pets.

Paul was a devoted Catholic, serving first as an altar server and later as a lector and member of the parish finance council.  He was active as a Mason in Columbia Lodge #91.  He previously served as Worshipful Master and Secretary and guided and mentored his son-in-law, Nikolin into the brotherhood.

He was preceded in death by his parents, Margaret (Budjack) and Frank Varzaly, and a sister, Mary Lou.  He is survived by his loving wife, Janet (Sereditch), his daughters, Jessica Dempsey (and her husband, Ryan) and Lindsay Kordhishti (and her husband, Nikolin), his grandsons, John Martin and Evan Dempsey, his sister, Margo Warwick, and his nieces and nephews.

Please note that MASKS are to be worn to the Funeral Mass, regardless of vaccination.

In lieu of flowers, contributions to the Masonic Youth Foundation, c/o Columbia Lodge #91, 1244 Bainbridge Road, Elizabethtown, PA 17022, would be appreciated.

To order memorial trees or send flowers to the family in memory of Paul Varzaly, please visit our flower store.

Our Lady of Lourdes Church