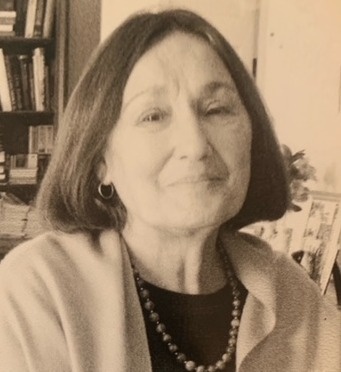 Nancy Louise (Psarto) Sergovic died peacefully at home on March 5, 2022, after courageously fighting Parkinson’s Disease and its many complications. She was loved by her husband John of 63 years, and her children John, Gregory (deceased), James, Jennifer (Caria) and David (Karen) and her grandchildren GianLorenzo, Andrew, Eva, Anna, and Maeve.

Nancy was born in Coatesville, Pennsylvania on August 3, 1936, the third child of John and Mae (Zemacke) Psarto. She was predeceased by her sister Joan Lohr and is survived by her sister Florence Frank and brother Joseph Psarto. Nancy’s father died in a work accident when she was five years old, and her mother raised four children while employed at Coatesville Hospital.

She attended public schools in Coatesville and loved her studies, at which she excelled. She had the highest respect for those who taught her. She was industrious and worked part time during her high school and college years and went on to graduate in 1958 from West Chester State Teacher’s College (now West Chester University). She then was employed in the Coatesville school system as an elementary school teacher.

In December 1958 she married John, while he was on leave from the Army, and they had a short but wondrous honeymoon in New York City. John was discharged in early 1959 and their first child was born later that year, and she became a stay-at-home mother. After living in Coatesville, she then lived in Drexel Hill for three years (1962-1965), Cherry Hill for seven years (1965-1972) where she made life-long friends, and from there Wayne and Berwyn, Pennsylvania for the remainder of her life.

Nancy embraced her life of family and community service. Her dedication to the schools of her children, her parishes and her community was remarkable. While living in Cherry Hill with five children under ten, she began visiting a nursing home to spend time with patients who had few visitors. She became dedicated to the parish of St. Katharine of Siena immediately upon enrolling her children there in the spring of 1973, upon moving to Wayne. She was active on the Parent’s Association and became Chair, started a hot lunch service for the school, and developed an enrichment program for music and literature, all this while also encouraging her own children to study musical instruments and helping them in their lessons and practices. She founded, co-founded, or participated in numerous programs at St. Katharine during her lifetime, including monthly parish coffees, HOPE (Help for People in Emergencies), the Women’s Guild, supervision of the kitchen facilities, the Gourmet Group, and Eucharistic Adoration. She cherished her participation in weekly Adoration.

As her children moved on through high school, Nancy became active at Archbishop John Carroll in Radnor and was a founding director of the Carroll Auction for Education (CAFE), an effort which is now approaching its fortieth year of existence and is a major fundraiser for Catholic education.

As her family grew her responsibilities increased and she became the principal caregiver to her widowed mother and to her widowed father-in-law who each lived in Nancy’s home for a time. She was a loving sister and aunt and was helpful to her extended family. Nancy was selfless. She believed that the resources she had were in part to be shared with others and she followed this spirit all her life.

As her husband John began traveling on business, Nancy started to join him occasionally and in 1972 took her first trip by air to Los Angeles. While there she attended several museums, and this started her lifetime interest of cultural pursuits and travel.

She enrolled as a part-time student at Rosemont College and studied the classics. Of particular interest were the writings of Dante, the great Italian historian, some of which she read multiple times. To continue her studies, she traveled with Rosemont College to a month-long program of Italian culture in Siena, Italy on two occasions, once with her daughter Jennifer.

Nancy enjoyed preparing for and hosting large gatherings of friends and family. She did not hesitate to prepare a five-course dinner for friends on New Year’s Eve, specifying black tie. She delighted in her role as hostess.

She was a beautiful and talented recreational swimmer in her early days. She did not participate in organized high school or college sports, but she enjoyed skiing in midlife and could ski for a week without falling once, and an entire day without complaint or fatigue. At night she would go out and do the cowgirl two-step in the ski resort saloons. She became an avid hiker and navigated many significant National Park trails, including walking in and out of the Grand Canyon, to the top of Yosemite Falls, and to the Overlook at Zion. She was a hearty traveler and her curiosity to learn about and experience the US as well as other countries and cultures never ended.

Nancy was an avid reader, enjoying the Wall Street Journal every day. She loved being surrounded by books.

She loved the ocean particularly the New Jersey beaches where she spent time with her family many, many summers. When her grandchildren arrived, she planned annual shore vacations with the entire family.

Nancy loved music and its many genres. In addition to developing her children’s music interests, she developed a deep love of the opera and the Philadelphia Orchestra, attending live events on a steady basis. She was a member of the Board of Directors of VOX, an a cappella vocal group, and traveled with them on a tour of Europe.

Her great love was for the country of her father’s family, who immigrated from Naples, Italy. She was able to travel to Italy frequently and became accustomed to most of the regions of this fascinating country. Nancy learned the Italian language so that she could communicate when traveling to Italy. To the delight of family and friends, she mastered many of the classic pasta and dessert recipes.

In lieu of flowers, donations are requested in the memory of Nancy P. Sergovic to St. Katharine of Siena School in Wayne, PA. 104 South Aberdeen Avenue, Wayne, PA 19087.