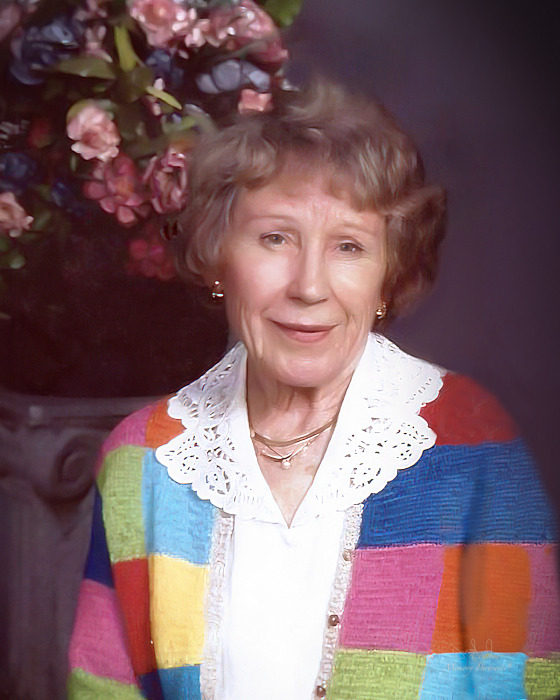 Marguerita (Rita) Grass was born Marguerita Viola Cook on October 3, 1921 in Omaha, Nebraska, the daughter of Clarence and Dolly Cook. The family moved to the Valley town of Modesto, California early in her life. Her father was a veterinarian and her mother was a home-maker active in the Presbyterian Church. In grade school Rita skipped a grade and at the age of 16 entered college at the University of California at Berkeley, majoring in Spanish with an eye to preparing for the Foreign Service.

At Cal, she met Joseph F. (Bud) Grass and became engaged around the time he was called up to serve in the Army during World War II. They were married just before Bud shipped out to the European theater. After the war and after finishing college they settled in Menlo Park, California where Rita was a home-maker and active volunteer with community organizations such as the Allied Arts Guild. Children followed, Randall in 1949, Nicholas in 1952 and Jeannine in 1960.

In 1964, the family moved to Strafford, PA in the Philadelphia area to accommodate Bud’s new position with Boeing Vertol. Rita began working at Bryn Mawr College in the public relations department, and she particularly enjoyed that rarified academic environment and the notables she came to know such as Sheik Yamani of Saudi Arabia, whose daughter attended Bryn Mawr and Charles Wofford, the university president who was an intimate of the Kennedys and later a Senator.

On retirement, she and Bud managed to pursue Rita’s life-long dream of traveling, to various European countries, including her cherished goal of visiting Spain, and China. Meanwhile she pursued her many activities which included two books clubs, the Philadelphia Horticultural Society, preparing weekly flowers for St. Martin’s Church, as well as rehabilitating the Memorial Gardens there, guide work at The Brandywine Museum, board membership at the Tredyffrin Library, work on local election boards, her beloved home gardening, including preparing annual entries in the Philadelphia Flower Show and playing tennis until the age of 89!  She was particularly proud of visiting the White House and meeting Nancy Reagan.

Following Bud’s death in 2010 after 66 years of marriage, Rita moved into the Shannondell Senior Community where she and Bud had planned to relocate and enjoyed the companionship of long-time friends who also lived there.

She is survived by sons Randall Fernand and Nicholas Carter, daughter-in-law Shirley, grandson Christopher Russo, grand-daughter-in-law Luz, and great-granddaughter Francesca Russo as well as nieces, nephews and many friends. Her daughter Jeannine (Nina) passed away in 2018.

To order memorial trees or send flowers to the family in memory of Marguerita Grass, please visit our flower store.