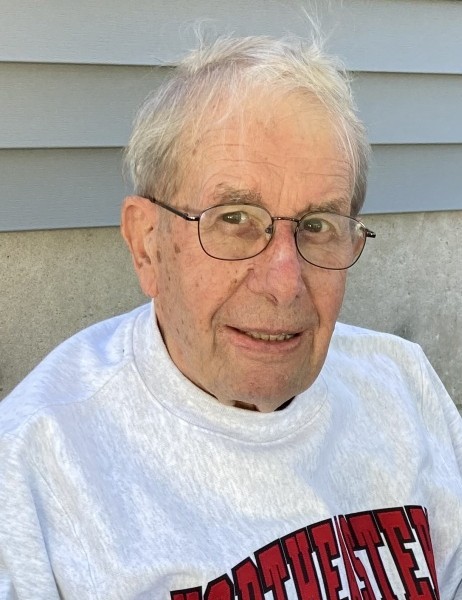 On the evening of January 19, 2022, Manfred Bierschwale of Newtown Square, PA passed away at the age of 88.

Manfred was born in 1933 in Hermannsburg, Germany to Friedrich and Marie Bierschwale. They suffered hardships during World War II, though the family was fortunate to own a prosperous general store in the center of town. Early in life, Manfred was a proficient piano student, led by his father’s desire that he pursue a musical career. Manfred had other ideas, preferring to lead his band of friends in soccer matches and countless adventures throughout the surrounding countryside.  His wanderings were well-chronicled among family and friends, who jokingly referred to him as a modern day “Hermann Löns – The Poet of the Heath.” Manfred’s love of the outdoors defined him and, as recently as December, he was still embarking on two to four-mile hikes. He left Germany as a young man after finding work in his family’s store unfulfilling. With eyes set on life in the United States, he worked at a variety of jobs, including farmhand, baker, dishwasher, and clerk before being drafted into the U.S. Army. Given the choice to serve in either Hawaii or Germany, he chose the latter to be closer to his family. Stories of his service years were shared joyfully. Two years later, he returned to New York, where he found great fortune in being hired by Lufthansa German Airlines as well as meeting the love of his life, Erika Hermann, on his first day on the job. Manfred and Erika were married in Hermannsburg, Germany in 1960 and began their life together in Queens, NY. They later moved to Glen Head to raise a family in the bucolic suburbs of Long Island’s North Shore. Manfred really appreciated the beautiful scenery, beaches and parks of Long Island, where he spent as much time hiking and biking as his busy life would allow.

Lufthansa Cargo provided a career path that lasted 35 years. A dedicated employee, Manfred worked his way up from cargo handler to Terminal Manager, making good use of his personnel skills. He described himself as “fair but firm,” while colleagues lovingly ribbed him with the gift of a desk sign that declared: Be reasonable…Do it my way! Working for Lufthansa allowed him to return to Germany on a regular basis, often with Erika and their children, Claudia and Ralph. Maintaining strong family ties and friendships was a top priority. Manfred’s wanderlust was something he generously shared with his loved ones, and together they travelled extensively throughout the world, reaching every continent short of Antarctica.

Manfred and Erika enjoyed keeping up German traditions which included family dinners, coffee and cake, Bundesliga soccer, a cold glass of Kölsch, and gatherings with a wide-reaching group of cherished friends, many of whom were fellow German expats. He was also an avid skier and enjoyed trips to the Rocky Mountains and Wolkenstein in the Italian Dolomites. In 2004, Manfred and Erika left New York after 45 years and resettled in Newtown Square, PA to be near Claudia and Ralph’s families and to dote on their four grandchildren. Devotion to family was paramount to Manfred, who so well regaled them with reminiscences of his younger years that his grandchildren grew to revel in the almost-mythical tales of his adventures and mischief. When Erika died in 2019, Manfred was heartbroken. He remained active and independent, continuing his frequent walks in Ridley Creek State Park, reading, watching soccer, and lecturing anyone who would listen about world affairs.

Manfred is survived by his daughter Claudia Muller (Mark), son Ralph Bierschwale (Debby), and grandchildren Talia Bierschwale, Max Muller, Derek Bierschwale, and Stefan Muller, as well as a wide circle of loving friends and family in Pennsylvania, New York, and Germany.  His younger brother Horst Bierschwale died in Germany in 2019.

In lieu of flowers, please consider a donation to Rails to Trails ( railstotrails.org ) or to the Nature Conservancy of Pennsylvania and Delaware ( www.nature.org ) in Manfred’s memory.

To order memorial trees or send flowers to the family in memory of Manfred Bierschwale, please visit our flower store.