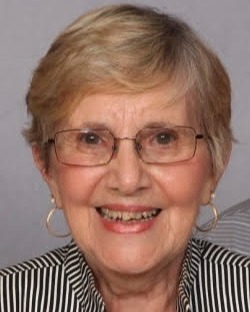 While in High School, Loretta was a cheerleader, Editor-in-Chief of the yearbook, and Secretary of the Class of 1956.  Upon graduation from High School, she was employed by her father at E. DeVecchis and Sons, Inc. Mount Union, PA. and then attended Grove City College.

In 1962, Loretta and Stan relocated to Drexel Hill, PA and then to Broomall, PA.  Loretta was involved with her parish family at Saint Pius X Roman Catholic Church having served as CCD teacher and Director of CCD.  She was involved with the choir and toured with them to Italy on several occasions, performing before Pope John Paul II and attending the canonization of Saint Catherine Drexel.  The canonization was an experience that she shared with her mother.  Loretta was employed with Curtis 1000 and Victoria Business Center as office manager.

A Mass of Christian Burial will be held at Saint Pius X Roman Catholic Church on Lawrence Road, Broomall, PA on Monday, December 12, 2022 at 10:00 AM.  Rite of Committal and burial will be following the Mass at Saints Peter and Paul Catholic Cemetery on Sproul Road, Springfield, PA.  Friends will be received at Donohue Funeral Home, 3300 West Chester Pike, Newtown Square, PA 19073, on Sunday December 11, 2022 from 4pm-6pm..

In lieu of flowers, memorial donations can be made to Alzheimer’s Association at www.alz.org/donate or call 800-272-3900.

To order memorial trees or send flowers to the family in memory of Loretta J. Puchalla, please visit our flower store.