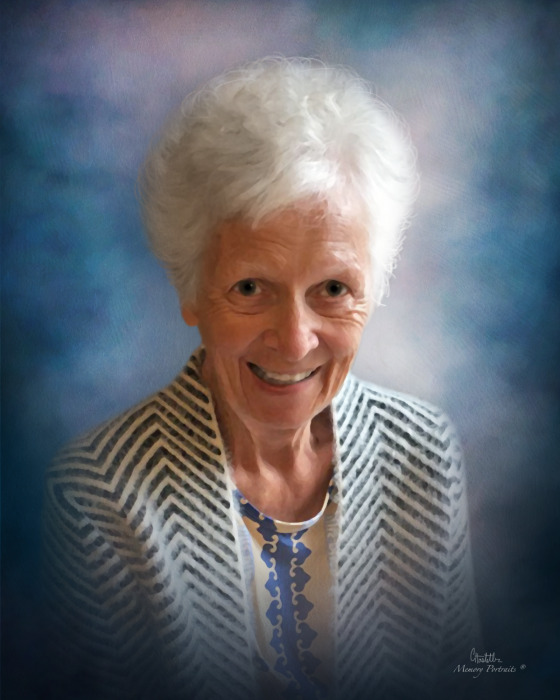 Joan was born in Providence, RI on January 4, 1931.  She was one of six children of Daniel and Johanna “Celia” Shea.  As the oldest daughter, her parents entrusted her with a lot of responsibility at an early age.  When her aunt in Brooklyn, NY had a new baby, Joan – who was just 14 at the time – traveled there alone by train to help take care of her young cousins.  She later worked at Cherry & Webb, a department store in Providence, where one of her customers encouraged her to go into teaching.

After graduating from Rhode Island College of Education in 1951, she taught grade school students in Barrington, RI.  When Joan’s sister and best friend, Pat, married and moved to Japan, Joan decided to accept a teaching position for children of oil company employees in Lake Maracaibo, Venezuela.  Little did she know how much that decision would shape the course of her life.

While in Lake Maracaibo, she met Bob Lewers, a handsome bachelor who had recently arrived from Denver, CO to work as an attorney for Sun Oil Company.  Joan met Bob after the father of one of her students, and one of Bob’s colleagues, attended a Valentine’s Day party at Joan’s school; he returned to his office and encouraged Bob to take Joan on a date.  They were engaged after a six-week courtship, and married in Providence in July, 1958.

Joan and Bob spent another four years in Venezuela, where their three sons were born.  In 1962, they returned to the United States to live in Dallas, TX, where their three daughters were born.  Joan thoroughly enjoyed living in Dallas, where she made lifelong friends, volunteered with Head Start of Greater Dallas and, along with her family, was a member of St. Rita Catholic Church.  She, Bob and family left Dallas in 1970 when Bob took a position at Sun Oil’s headquarters in Philadelphia, PA.  In search of a new home, Joan found a plot of land in Wayne, PA, upon which she and Bob built the house where they would spend the rest of their lives.

As her children grew, Joan decided it was important to continue her own growth.  She enrolled in Temple University’s MBA program, graduating with honors in 1984.  She then became a Certified Financial Planner.  She spent most of her career practicing as a CFP with Sims Financial, and dedicated much of her work towards educating women about their finances.  Many of her clients became her good friends.

Joan constantly instilled in others the importance of education. She took great pride in seeing all her children graduate from college, and all her daughters pursue graduate degrees.  She also served on the Radnor Township School Board in the early 1990s. She recognized that learning extended beyond the classroom, and encouraged learning through experiences, whether by visiting a museum, reading a good book, or taking a trip.

Joan loved to travel with her family.  On her first big adventure, she and her sister Pat drove across the U.S., visiting many of the National Parks.  During their marriage, she and Bob traveled extensively throughout the U.S. and Europe.  Their journeys also took them to China, Russia, Egypt, Southeast Asia, South America, and New Zealand.  In recent years, she enjoyed trips with one or more of her children and grandchildren to England, France, Italy, and, of course, the beautiful beaches of her native Rhode Island.

Joan was a devout Catholic; she believed strongly in the power of prayer.  She said the rosary daily, and frequently prayed a novena for a friend or family member in need.  For the last 50 years of her life, she was a parishioner at St. Katharine of Siena in Wayne.

Relatives and friends are invited to visit the family Saturday, March 20, 2021 10:00 AM-11:00 AM at St. Katharine of Siena Church, Lancaster and Aberdeen Avenues, Wayne, PA and to her Funeral Mass at 11:00 AM.   Interment Calvary Cemetery.

Her Funeral Mass will be livestreamed on the St. Katharine of Siena Church Website https://www.youtube.com/channel/UCIc4OFU0aPr51trE_OMyh2g/featured

Masks are to be worn to the viewing, Funeral Mass and Cemetery.  Social Distancing is to be observed.

In lieu of flowers, contributions can be made in memory of Joan Lewers to support the Ovarian Cancer Research Center (OCRC) at Penn Medicine. Checks should be made payable to the ‘Trustees of the University of Pennsylvania’ and indicate “Joan Lewers” on the check memo line or on a note with gift.

To order memorial trees or send flowers to the family in memory of Joan Lewers, please visit our flower store.