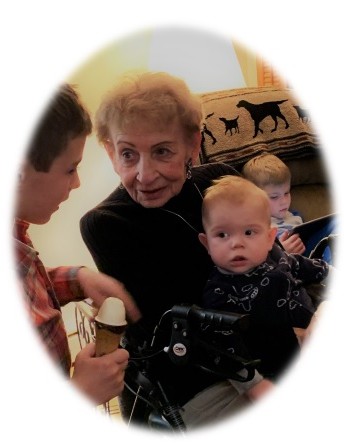 Jeanne Daignault Hoyt, 88, passed away peacefully on March 26, 2021 in her Exton home. She leaves behind her daughter Catherine (“Cathy”) Reed and husband Brent; daughter Janet Eilertsen and husband Herb; grandchildren Rebekah, McKenzie, Evan and Nathan, and her beloved great-grandchildren Caleb, Oliver, Charlie, and Joel. She is predeceased by siblings Gloriette (Kingsley), Richard, Andrew, and Claire (Clark). Surviving siblings are Theresa O’Connor of Florida and Greg Daignault of Connecticut, as well as dozens of nephews and nieces.

Raised in Noroton, CT she was fifth among her six other brothers and sisters. After raising her daughters (children with Walter Rowe (deceased)), Jeanne left New England to happily walk the sunny beaches of Florida with her late husband Bill.

It was Bill who opened Jeanne’s eyes to the joy of travel. Together they toured many of the country’s national parks, drove along the spectacular Pacific coast, and gazed on the awe-inspiring vistas of the Southwest. They capped off their many travels with a visit to Bill’s family roots in Ireland.

Jeanne spent the last five years near her daughters in Pennsylvania. Her last years were marked with significant physical and health challenges, but she did not allow her limitations to define her. She lived independently and faced each day with courage, fortitude, and without complaint. She spent quiet days painting and was especially fond of painting birdhouses. Her style was akin to primitive or naïve, and she took great pains to personalize each birdhouse with a creative theme. She enjoyed baking and recently discovered loom knitting. Many, many heads were a bit warmer this year because of “Gigi’s” knitting skills.

Funeral services will be private. In lieu of flowers, memorial contributions are suggested in Jeanne’s memory to Samaritan’s Purse International Relief Organization (www.samaritanspurse.org).

To order memorial trees or send flowers to the family in memory of Jeanne Hoyt, please visit our flower store.