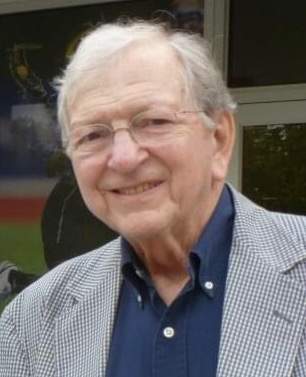 James Hill Wolfe, 89, of Newtown Square, formerly of Berwyn, passed away December 21, 2021 at his residence in Dunwoody Village.

He was raised in Watsontown, PA and graduated from Pennsylvania State University in 1955 with a BS degree in Accounting. Jim earned a CPA and enjoyed a long and successful career with Coopers & Lybrand (now PwC) in Philadelphia, PA. In addition to his career with Coopers, Jim was active in the Pennsylvania Institute of Certified Public Accountants, serving on the board and as president. After his retirement, Jim remained professionally active by serving on several corporate boards.

Having been a high school athlete, Jim continued to participate in sports. He was a member of Waynesborough Country Club, where he could be found on the tennis court, cheering for his daughters on the swim team, or, in later years, relaxing with family in the clubhouse restaurants. Some of Jim’s fondest memories were of annual family vacations to Hilton Head Island.

Jim was an enthusiastic Penn State football fan who held season tickets for many years, and in more recent years never missed watching a game on television. Jim was also a gifted storyteller who enjoyed entertaining his family with tales of his escapades and adventures growing up in Watsontown and at his family’s summer cabin. Mostly, Jim was a devoted husband, father, and grandfather who was well loved and will be deeply missed.

Jim is survived by his wife of 64 years, Mary Louise (née Moore) Wolfe; his daughters Julie (Howard) Sakin and Lynn (Edward) Rossotti; his son-in-law Scott Wetherell; and his grandchildren Noah and Eliana Sakin, Jed and Elizabeth Rossotti, and Shelby and Sally Wetherell. He was predeceased by his daughters Catherine Wetherell and Dana Wolfe, and by his siblings Caroline Kling, Doris Barlett, and Frank Wolfe.

A memorial service will be held at a future date.

To order memorial trees or send flowers to the family in memory of James Wolfe, please visit our flower store.

Services will be held at a later date