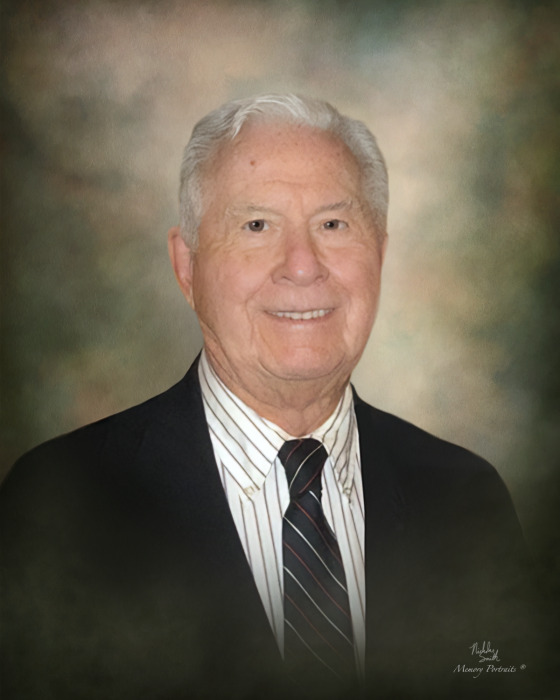 He was the loving husband of the late Anne B. Haines.

Born in Upper Darby, PA to the late Thomas J. and Ruth A. Haines, Jim attended St. Alice grammar school, graduated from West Catholic High School and enlisted in the US Army Air Corps, where he proudly served his country as a bombardier/navigator.

After the war Jim graduated from St. Joseph’s College (now University). He spent most of his career in sales; the textile industry, the auto industry (Jaguar/Mercedes-Benz) the JI Case Co. and finally with the company his grandfather founded - the James Austin Company.

Jim married Anne in 1959 and their love continued even after Anne’s passing in 2015. Together they raised five amazing children: Austin Haines (Amy Dance), Katie (Michael) Frankovich, Tom (Rita Pizzaro) Haines, Liz (Christopher) Chadwick, and Gary Haines (Theresa Fisher). He was very proud of his grandchildren and loved to tell of their accomplishments to anyone and everyone who would listen. Zack & Jimmy III Haines, Danielle Pizzaro & Nick Haines, Riley, Madeline, & Hadley Chadwick, and Mike Frankovich Jr. will all miss G-Pop but will have his many stories that they will always treasure.

Jim was also predeceased by his brother Thomas Haines, his sisters and brothers-in-law; Ruth & William McKee and Mary Margaret & Robert McKee and his daughter in law Linda M. Haines.

Big Jim loved swimming and telling tales of his days as a lifeguard in Ocean City New Jersey. He had numerous saves, including the pilot of a plane that crashed just beyond the breakers in front of the Flanders Hotel. Only 2 boats made it through the rough surf that day and Jim’s was the first to reach the plane.

After raising their 5 children Jim and Anne, always a team, traveled throughout the US in their RV. They enjoyed visiting friends and making new friends everywhere they went.

The family recognizes and is grateful for the care and dedication of Dad’s resident support person, Linda Hill, as well as the staff at Canterbury Skilled Nursing at White Horse Village and the Hospice Team at Compassus Hospice during his final months.

There will be a Funeral Mass 1:30 PM Friday, January 28, 2022 at SS Simon and Jude Church, West Chester, PA . Family will arrive at 1:00 PM. Due to COVID concerns the family is requiring masks for the service. There will be no repast. Interment Arlington National Cemetery at a later date.

In lieu of flowers donations, in Jim’s memory, may be made to the Gary Sinise foundation: https://www.garysinisefoundation.org/donate/ .

To order memorial trees or send flowers to the family in memory of James Haines, please visit our flower store.