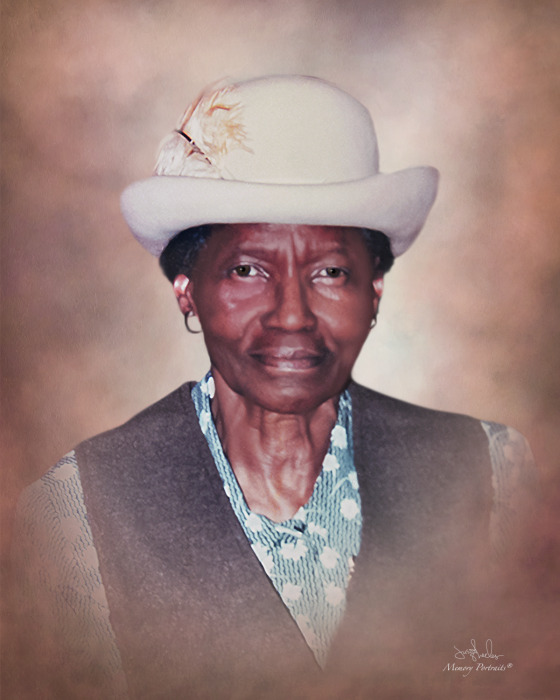 Rejoicing in hope, persevering in tribulation, devoted to prayer, contributing to the needs of the saints and practicing hospitality.    Romans 12:12-13

She was the first of four children born to the late Augustus J. and Daisy Credell Jackson. Her father wanted his first born named after him, so he named her Gussie.  When her mother Daisy passed, Gussie helped to care for her three siblings, even though she herself was only the tender age of seven. Gussie’s father remarried Ossie Brown Jackson, who helped to raise Gussie and gave birth to eight additional siblings. Gussie assisted with the care of all of her sisters and brothers.

Gussie received her formal education in Eastman, Georgia. She accepted the Lord Jesus Christ as her personal Savior at an early age and joined the New Salem CME Church.  In 1953, Gussie was a part of the Great Migration to the Northern United States, making Philadelphia her home. In 1959, during her search for a new church family, she met a member of White Rock Baptist Church who invited her to attend service. Gussie loved the preached word, the church service, church school, and Baptist Young People’s Union meetings in the evening. She said: “Being in church all day on Sunday was what I needed and I was looking for something and found it at White Rock.” She joined White Rock in 1960 and became an active participant throughout the rest of her life.

Gussie worked for forty years with the Flanagan Family of Philadelphia, Pennsylvania, providing domestic assistance and childcare to the family.  After she retired from this position, she worked for the Archdiocese of Philadelphia until she was in her late eighties.

Gussie was a faithful and generous member of the White Rock Baptist Church. She served as the President of the Ladies Auxiliary Usher Unit for many years and later served as Treasurer. In addition to her service as an usher, she was an active member of many Women’s Mission Union (WMU) circles and auxiliaries, serving as an officer of the Breakfast Group, officer of the Good Shepherd Circle, member of the Trustee Aid Circle and member of the Helping Hand Circle.  She especially enjoyed the WMU trips to New York City’s Theater District to see Broadway shows.  Gussie was faithful in her service to her church and her Lord, rising early on Sunday mornings to set tables for the Breakfast Group. When her ability to stand as an usher was limited, she sat at the door to greet those who entered the sanctuary for service.

Gussie loved to hear and learn the Word of God.  She regularly attended Prayer Meeting, Bread of Life Bible study and Church School at White Rock.  New Salem CME Church was her church home in Georgia and each August she would make the 18-hour journey for revival. She never wanted to miss the celebration so she asked the Lord to give her the strength for the journey.

She loved the Lord, her church family, and cherished the time she served at White Rock.  On her last earthly Saturday, March 13, 2021, she said, “I want you to come and take me to church, right now. I want to go to church.”

On Monday, March 15, 2021, she peacefully departed this life and now every day is Sunday.

Masks are to be worn to the visitation and the Funeral Service.   Social distancing is to be observed.

To order memorial trees or send flowers to the family in memory of Gussie Jackson, please visit our flower store.