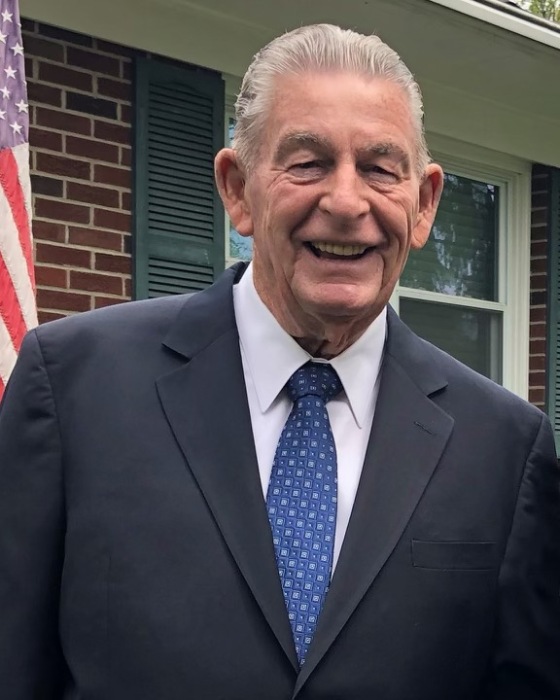 Francis Joseph Dunn, III of Newtown Square (and long-time resident of Broomall) passed away peacefully on October 28, 2021 surrounded by his family after a long battle with illness.

Frank dedicated his life in service to his nation and community, first by joining the Broomall volunteer fire department at 16.  Upon graduation from Marple Newtown Senior High in 1962, Frank enlisted in the United States Navy, serving as a decorated aircrewman (VAW-11) embarked on the USS Midway during its combat cruise in Southeast Asia.  After leaving the service, Frank joined the Marple Township Police Department as a patrolman.  He also volunteered with the Marple Ambulance Corps.  Frank was promoted in 1976 and became the Marple Police Department’s first Lieutenant.  Frank continued his rise through the ranks becoming Superintendent of Police in March 1996 and serving until his retirement from the force in December, 2004.  After “retirement”, Frank continued to serve on Marple Township’s Emergency Management Committee and went to work for Marple Township in its Code Enforcement Department.  In 2016, Frank finally retired after nearly 50 years of service to the residents of Marple.

Frank enjoyed spending time at his summer house in Wildwood Crest, NJ.  He was an avid saltwater fisherman, presumably enjoying the camaraderie of the experience as he had few fish to show for it.  When not sitting on the beach, Frank risked life and limb taking the various unseaworthy vessels he owned over the years into the back bays and inlets seeking his white whale (in his case, the ever-elusive flounder).

Frank is survived by his wife of 53 years Kathy (Bowes) Dunn, who lovingly cared for him during the decline in his health, and his two children Joe (Angela) and Aimee (Tom).  Frank’s later years were consumed by his love for his three grandchildren Francis, Natalie and Ryan.  Frank will be missed by his 4 brothers, Charles (Cindy), William (Claire), Timothy, and Peter (Brenda) and his numerous sisters and brothers-in-law, nieces, nephews and dear friends.  Frank was predeceased by his parents Francis J. Dunn, Jr. and Ida Mae (Beale) Dunn.

In lieu of flowers, the family asks that you donate to the Marple Hero Scholarship Fund at https://www.marpleheroscholarshipfund.com/support-the-cause .  Marple Township is served by many government organizations designed to promote public safety and welfare and the Hero Scholarship Fund offers peace of mind for those that work on our behalf, looking after them if they are disabled and their families if they pass on during their duties.

To order memorial trees or send flowers to the family in memory of Francis Dunn, please visit our flower store.