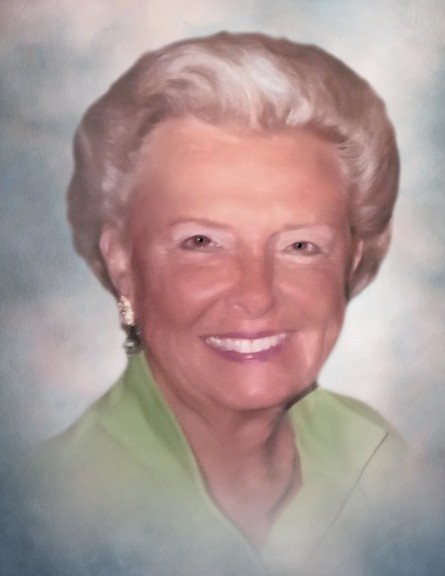 Elizabeth Kelly Kearney, age 91, passed away peacefully on Friday, July 9, 2021, at her daughter’s home in Media, PA. Born Elizabeth, a.k.a. Betty, Kelly, she was raised in the Northwood section of Baltimore city. She attended the Institute of Notre Dame and College of Notre Dame of Maryland. She married Francis X. Kearney in 1989 and they lived all of their married life in Timonium, Maryland and Palm Beach, Florida.

Betty and her friend Mary Kelly Gallagher became best friends in high school because they had the same last name and sat next to one another.  That friendship lasted throughout their lives.  While in school, Betty was president of the Catholic Student Mission Crusade which sent them to New York for a yearly meeting.   During those yearly trips Betty and Mary slipped away from the meeting and went to Frank Sinatra shows.  They waited at the stage door after every concert hoping to get glimpse or an autograph.

Betty got her first job at McCormick & Co. when she was 15 years old.  Betty was responsible for delivering the mail for all the offices and for taking the cash deposits to the bank.  Betty often told the story of how afraid she was of being held up while she was delivering the daily cash to the bank.  She agreed to continue doing the bank deposit after executives told her it was insured. Betty ended her career at McCormick & Co., as a Corporate Communications Specialist.  She relocated to Miami, Florida to assume the role as Director of Conventions for the National Association of Corporate Real Estate Executives.

Betty and Frank were avid travelers and theater devotees. After Frank died, she continued theatre trips until her services as “Nana” took her to California and New York City.  Her reputation preceded her as the only grandmother that wore high heels to play with Hanna and Bradley in the sand box in Central Park.  Betty’s parenting skills were very strict and that carried over to her time with the grandchildren.  While growing up, there was never a doubt amongst us kids that she loved us and we were her first priority.  However, she was so excited when she started having grandchildren that we definitely felt second fiddle.  During the last eight months of her life that she spent with her daughter Kathy, the grandchildren often called to update her on work, school, sports and their lives.   It was apparent how much love the grandchildren had for their Nana.  Mary Carol and Shannon risked traveling from California at Christmas 2020.

Father Kevin Mueller is saying the funeral mass on July 24th, 2021.  Father Mueller is the son of Betty’s dearest friend Maris Stella.  For many years, Betty was a member at St. Joseph’s Parish in Cockeysville, MD which is where Father Mueller was assigned after his ordination.  It was her specific wish that he say her funeral mass.

The Celebration of Life Mass will be at 12:30 p.m. immediately following visitation.

Interment will be held privately on July 23, 2021 which was Betty’s birthday.

Mercy Ridge requires that all guests to the community wear a mask.

In lieu of flowers, contributions may be made in Betty’s name to:

PLEASE CLICK IN THE BLACK SCREEN BELOW AT THE ARROW TO PLAY THE SLIDESHOW AND VIDEO FROM BETTY'S 90TH BIRTHDAY PARTY.

To order memorial trees or send flowers to the family in memory of Elizabeth "Betty" Kearney, please visit our flower store.

Interment to be held privately