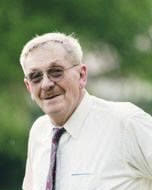 Born in Washington, DC in 1936, Edgar was the son of the late John F. M. and Marie (nee Muz) Otten. He was a 1954 graduate of Upper Darby High School and completed his studies at the Philadelphia College of Pharmacy in 1958. Edgar served honorably in the US Army. He worked as a pharmacist at West Point Military College, Wyeth Laboratories, and Pathmark Pharmacies. Edgar loved to golf and bowling and was a member of Paxon Hollow Country Club and the American Bowling Congress League of Champions. He became an avid cyclist later in life, averaging 10 or more miles per day. He was a dedicated friend of Bill W. He loved trivia games and could answer every question on Jeopardy. Ed spent his final years at Exton Senior Living, surrounded by friends and an incredible care team who indulged him in his wry sense of humor and treated him like family.

Edgar was the loving father of John Roy Otten (Danielle), and William Walter Otten (Amy) from his marriage to June (nee Roy); caring Opa of Abigail, Andrew, Michael, Jack, and Eleanor; dear brother of Mathilde Otten, the late Ralph Otten (Ethel), and the late Frieda Davis. Edgar is remembered with love by many nieces, nephews, friends, and caretakers, and his presence and quick wit will be especially missed at Gloria’s (Davis) family dinners.

In lieu of flowers, memorial contributions to the American Lung Association, PO Box 756, Osceola, WI 54020-0756, would be appreciated.

To order memorial trees or send flowers to the family in memory of Edgar D. Otten, please visit our flower store.
Send a Sympathy Card