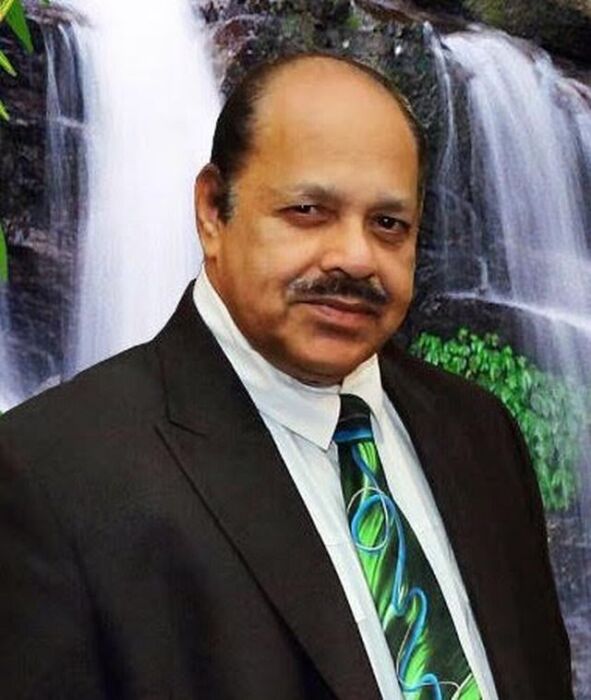 Dr. Kurian Mathai (Kunjumon) was born in Kundara, Kollam, to the late Sri. K. Mathai and Smt. Kunjamma Mathai at Valiyavila Kizhakethil Veedu (V.V.K.V) on May 6, 1940. He was the third child and only son. His siblings are Annamma, Elykutty (late), Marykutty (late), Sosamma, and Anie. He maintained a close  relationship with his family.

Dr. Kurian was united in Holy Matrimony with the late Saramma Kurian (Mathew) Kochuthundil house, Mavelikara.  They were blessed with 2 children Mathew and Elizabeth. He has 2 grandchildren Reuben and Esmee, born to Mathew and his wife Ambily. His daughter, Dr. Elizabeth Kurian is married to Hudson Cesar. After Saramma’s passing, Dr. Kurian married Marthamma, bringing her daughter Anisha, married to Paul, into the family. He was a very loving husband, father, and grandfather.

He attended the University of Kerala, TVM where he eventually worked as a professor. After his studies in India, Dr. Kurian was recruited by the Board of Education of Uganda. In this prestigious position, he made many key decisions that led to the expansion and development of Uganda’s education infrastructure. He served as a professor while living in Nairobi, Kenya as well.

In early 1976, the  family immigrated to Philadelphia, PA. For the next 35-40 years he embedded himself into the Fabric of Malayalee American Community serving in multiple Leadership roles. He served as the president of KALAA for 3 terms and Vice President for 2 terms. He also served as regional VP and Convention committee member of FOMAA. He maintained a positive relationship with multiple cultural organizations including MAP, Nattukuttam a literary group and SNDP, to name a few. His fervor for the arts led him to found Kalabhavan USA.

He was a strong-willed and independent individual who thrived in meaningful discussions. He was a visionary, entrepreneur, writer, patron of the Arts and collaborated with many different organizations to bring forth cultural events. He had the innate ability to engage people from all walks of life regardless of Age, Race, Religious or Political background.

Faith was integral to his life as was shown through his passionate service to the community. He served on the executive board of the Ecumenical Fellowship for numerous years. He was one of the founding fathers of St. Thomas Malankara Orthodox Church of Philadelphia (Mascher Street). He served the church as Secretary and Treasurer for multiple terms and was a regular attendee until his passing.

Dr. Kurian entered into the eternal and joyful rest of Christ on May 17, 2021, at the age of 81. Though our hearts are deeply saddened, we take comfort in the knowing that he lived a happy and full life.

For those unable to attend the Funeral Service, the Service will be livestreamed at https://www.facebook.com/thedonohuefuneralhome/

To order memorial trees or send flowers to the family in memory of Dr. Kurian Mathai, please visit our flower store.