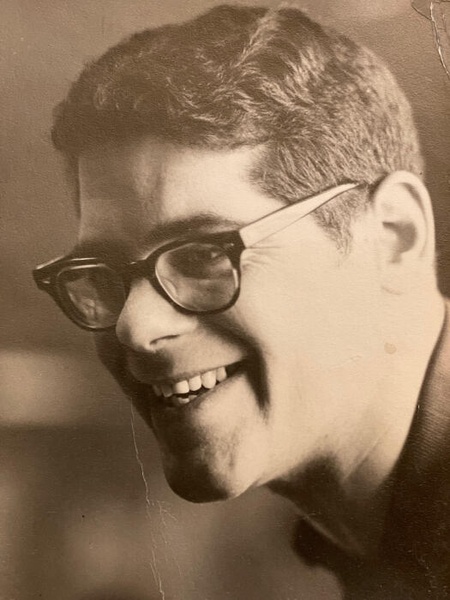 Charles Carroll Knight, Jr. (“Charlie”) died peacefully at home on July 22, following a lengthy battle with multiple health issues, including complications from a near fatal car accident he miraculously survived in 2014.

Charlie was born in Philadelphia in 1939 to Ruth Greene Knight and Charles Carroll Knight. He grew up on Montgomery Avenue in Haverford, where he ultimately returned with his young family and lived next door to his childhood home for the rest of his life.

Known by classmates as “Stormy” Knight for his tempestuous personality, Charlie attended the St. Andrew’s School in Delaware and Harriton High School in Lower Merion, PA. Following high school, which he didn’t particularly care for, he pursued his passion for music, playing drums in a jazz band while studying electronics engineering at the RCA Institute in New York City.

Back in Haverford, he was introduced to his new next door neighbor Mary Louise Franz (“M’Lou”), who would change the course of his life. He was in awe of M’Lou’s beauty and gentle spirit; and she was charmed by his incredible sense of humor and creative talents. After a promising two-year courtship, he proposed – and was quite surprised to be turned down! It turns out she wanted the ring, but had some conditions: complete military duty, get a college degree, and lose a few pounds. A man on a mission, Charlie joined the U.S. Army, stationed at Redstone Arsenal in Alabama. While there, he enrolled at the University of Alabama and completed his degree in record time.

M’Lou and Charlie got married on December 27, 1965 and children followed: Lisa in 1969 and Charles III in 1971. Pursuing a career in the packaging machine industry, he founded Knight Packaging in 1973 and went on to become a renowned salesman up and down the East Coast.

A true family man, he cherished his time in Belgrade Lakes, ME, Pocono Lake Preserve, PA and at the Pohoqualine Fish Association, where he honed one of his greatest skills and life-long passions – fishing. He became an accomplished and acknowledged expert in all forms of angling. Naturally, he offered an unending supply of incredible fish tales, some of which have actually been confirmed. He developed deep and respected friendships with fishing legends like Ed Jaworowski, Joe Humphreys, and Lefty Kreh. Charlie also gave back to his beloved sport, serving on the Fish Committee at PLP for decades (where he is considered a lake fishing legend) and helping to establish the Pennsylvania Fly Fishing Museum Association (where he served as President). He was also a long-standing, popular member of the Anglers’ Club of Philadelphia.

In addition to his wife M’Lou, Charlie is survived by his daughter Lisa and his son Charlie, grandchildren Samantha Gibby, Mac Gibby, Mimi Knight, Chase Knight and Ryland Knight, as well as his son-in-law Todd Gibby and daughter-in-law Carrie Hirsh Knight.

In lieu of flowers, a donation to the PA Fly Fishing Museum Association, 101 Shady Lane, Carlisle, PA 17013 would be appreciated.

To order memorial trees or send flowers to the family in memory of Charles Knight, Jr., please visit our flower store.

Our Mother of Good Counsel Church

Our Mother of Good Counsel Church