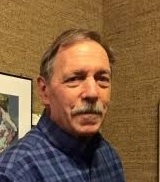 Bruce, age 81, of West Chester and formerly of Phoenixville, PA passed away on June 12, 2022.  He is survived by three siblings James S Dayton, Douglas J Dayton and his wife Maria, and Susan Goelz and her husband Carl.  Nieces and nephews include Sarah McGlinchy, Christopher Dayton, Jeffrey Goelz and Christin Goelz.

Bruce had numerous and varied interests.  After graduating from the Philadelphia College of Art with a Fine Arts degree, Bruce enlisted in the US Marine Corps, for which he remained very proud of his service. Bruce was an avid reader of military history, he especially enjoyed books about World War Two pilots and the planes these pilots flew.

As a young adult, Bruce was an active cyclist, often competing in bike races around the Philadelphia area.  During his entire life, he had a great interest in cars and motorcycles.  At one point in time, Bruce owned ten or more motorcycles. He had many favorites, but one was an Indian Scout.

Bruce was always interested in sports.  He was a dedicated Eagles and Phillies fan throughout his life, and later developed a strong interest in Villanova basketball.  He participated in local softball and volley ball teams. This interest continued well into his later life as he was a member of the national champion US Open senior volleyball team in 1991.

But the main interest in his life was his artwork.  Bruce work for the Defense Department as an artist completing various projects that would include portraits of active duty officers, graphic designs for posters, and computer presentations.  Working for the Defense Department helped pay the bills.   His real artwork was done at the Pennsylvania Academy of the Fine Arts and the Chester County Art Association.  At both of these organizations, Bruce would organize and conduct classes which allowed him to share his talents as an illustrator in pastels, charcoals and water colors.

Bruce will be missed by his family and friends.

In lieu of flowers, memorial contributions may be made to the Chester County Art Association at https://public.chestercountyarts.org/public/donateguest.

To order memorial trees or send flowers to the family in memory of Charles Bruce Dayton, please visit our flower store.
Send a Sympathy Card