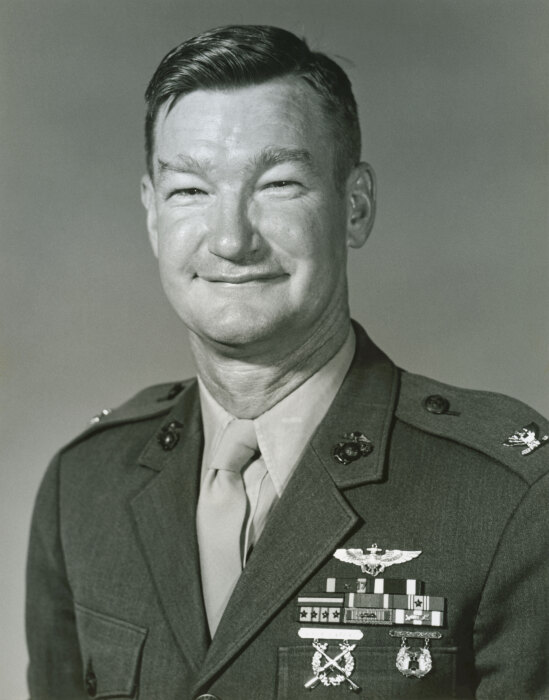 Born December 25, 1932, in Charlotte, NC, he was a son of the late Herbert and Mary Edith (nee Walker) Summers.

Ben went to various elementary schools in the Carolinas, Savannah, Georgia, and Washington DC.  He graduated from Maryland Park High School in Seat Pleasant, MD, in 1950.

Ben had a lifetime career in the Marine Corps as an Aviator.  He enlisted in the Marine Corps in October 1951.  After attaining the rank of Corporal, Ben attended flight school.  He earned Wings of Gold and a commission as a Second Lieutenant in 1954. He married Barbara (Bobbi) Ann Roher of Clarksville, PA, on August 27, 1955, in District Heights, MD.

As a jet attack pilot, Ben was a veteran of the Korean and Vietnam wars.  He completed 4000 hours of flight time, including 238 combat missions.  Over his aviation career, Ben flew varied military aircraft, including the A4 Skyhawk, OV10 Bronco, and the Bell AH1 Cobra. Ben's last tour of duty as a colonel was the Commanding Officer of the NROTC Unit at Villanova University.   He retired from the Marines Corps in 1982 and stayed on at Villanova as an Assistant Dean of the College of Liberal Arts and Science.

His life passions were his family, his wife, and his strong Christian beliefs. He was married for almost 66 years.  His church involvement had him in various roles at the Willistown United Methodist and finally as a member of the Exton United Methodist Church.  Time with family, tinkering with home projects, gardening, enjoying good food and drink, and watching bluebirds were among his favorite interests. Parkinson's Disease resulted in his residence and treatment at the Coatesville VA Medical Center, where he received exemplary and compassionate care.

One may contribute to the Intrepid Fallen Heroes Fund, https://www.fallenheroesfund.org/donate or the Michael J. Fox Foundation for Parkinson's Research in place of flowers.

To order memorial trees or send flowers to the family in memory of Bennie Summers, please visit our flower store.