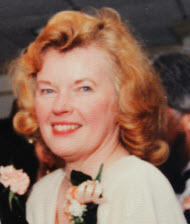 Relatives and friends are invited to her funeral:

In lieu of flowers, the McAllister Family request that you bring a picture of you and Barbara.

Barbara Ann Ruane was born to Irish immigrant parents Patrick and Betty Ruane in Brooklyn, New York in January of 1938. Her younger brother Patrick arrived in January of 1940. Later her parents moved to Astoria where the majority of her childhood was spent. In her late teens, her parents achieved the American dream and purchased an apartment building in Woodside, Queens.

The days were full of adventure for a child in Astoria, Queens. The tenement apartments that lined the city streets teemed with children and games of hopscotch, chase, and double-dutch jumping (a skill that Barbara mastered and continued to do well into her seventies). There was also school. Barbara attended the competitive St. Joseph’s Elementary School in Astoria. She was in the school marching band and also took Irish step dancing lessons – a skill that she could still do until last summer. The dancing lessons ended when she got a job at the local Woolworths in order to pay for her high school tuition at Dominican Commercial Academy in Jamacia Heights.

In her last year of high school, Barbara attended a dance on the night of Christmas Day. There she found her true Christmas gift -- a tall, blond, young man who seemed to like her. Later he called for a date. There was a slight problem -- while she remembered his last name “McAllister” she couldn’t remember his first name. She spent their first date listening for clues before somebody called out “Hey, John” and he responded. They fell in love and spent the next two years courting while he attended Manhattan College and she worked, first as a court stenographer, and later as a secretary at Dewey Ballantine on Wall Street. During this busy time she also attended night school at St. John’s University.

Barbara and John married on August 2, 1958 and honeymooned in the Poconos before he started his first engineering job at Sperry Gyroscope and she continued at Dewey Ballantine. Eighteen months later they had a daughter, Barbara Ann “Bobbie”. A second daughter Linda Susan followed fourteen months after.

A consummate storyteller, Barbara could make a simple walk down the block a spellbinding story for her daughters. She was generous with her love, her time, her warm hugs, and her encouraging smile. But a squint of her eye and a click of her fingers could propel her young daughters into good behavior. She was a passionate mother and her daughters knew that she always had their best interests at heart. Her family – husband, children, parents, brother, and in-laws knew that she loved them and supported their endeavors – especially their parties! Her brothers and sisters-in-law both loved and liked her, as did her nieces, nephews, cousins, and extended family. Throughout the years, she retained relations with childhood friends, all her bridesmaids, and her former neighbors.

Barbara excelled at accomplishment. When she set her mind to a goal, nothing could stop her. As an adult, she learned to play the piano, tin whistle, piano accordion, recorder, and guitar. She also learned to sew and was so skilled that she made all her daughters’ prom dresses. The McAllister family knew not to bother mom if she was conducting one of her “scientific studies”. These studies ranged from making silk flowers, cooking, ping-pong, poetry, painting and even PacMan. She was also a skilled bridge player and loved playing with the neighborhood ladies once a month. After reading about an investment club, Barbara help found the Valley Forge Investment Club – a group of a dozen women who met once a month for over ten years to discuss investments and the economy. Once Barbara charted any course, she mastered her goal with her strong discipline and work ethic.

Barbara was also a great listener. She heard what was said, and then heard what was not said. She could access a situation and see beyond the surface and see the deeper truth. Absolute strangers, even people in a supermarket line, would instinctively talk to her, telling her of their deepest hurts and bitterest sorrows. Somehow, she always seemed to know what to say and help them chart a new direction. It was a gift, but her family knew to leave her in the car if they were in a hurry!

In Barbara’s later years, she taught music theory to the students at her daughter Linda’s piano studio. She was gifted with children. So many lives were enhanced as “Grandmom” teased them with a weekly riddle and gently instructed them on both the theory of music while creating confidence to succeed in both piano and in life.

Barbara’s passing leaves a hole in the heart of her husband, her daughters, her son-in-law and her beloved granddaughter. It is hard to imagine a future without her steady hand steering the McAllister family.

Those who knew her were lucky to have her in their lives. Now they are lucky to carry her memory in their hearts.

To order memorial trees or send flowers to the family in memory of Barbara McAllister, please visit our flower store.