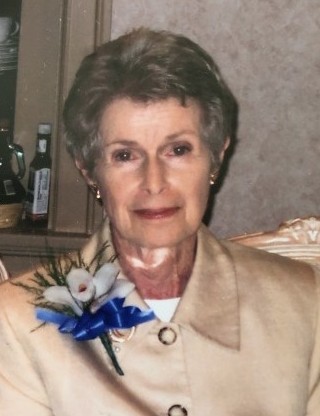 Born in Phillipsburg, NJ, Agnes was the daughter of the late Robert E. and Elizabeth (nee Hanlon) Tirrell.  Her family moved to Newark, NJ in her early years, following her father’s successful silk and textile business, and she attended high school at Mount Saint Mary Academy in Watchung, NJ, graduating in the Class of 1940.  She went on to earn a BA in English at Rosemont College in Rosemont, PA.  In these years she developed a love of reading, and throughout her life believed strongly in the power of books to expand and enrich the mind, body, and soul.  She pursued this passion vigorously, consuming two or three books per week for most of her adult life.  Although she was busy raising ten children, she volunteered at her local libraries and in her children’s schools as often as possible, and in her retirement years took on the task of organizing and running the library at Hershey’s Mill in West Chester, where she lived with Albert for nearly 30 years.

Prior to World War II, she met her future husband through her cousin who attended law school with him, and as Albert trained and went off to war with General Krueger’s 6th Army (Signal Corps) in the South West Pacific for nearly three years, they maintained close correspondence.  Upon the close of the war, they fulfilled their plans to be married, and established their household and roots in Media, PA, where Albert grew up, and they started a family and a legacy that would include ten children, 12 grandchildren, and thus far, one great grandchild.  One of her grand-daughters followed in her footsteps at Mount Saint Mary Academy, graduating 80 years later in the class of 2020.

Married by the late Bishop Fulton J. Sheen at the Cathedral Basilica of the Sacred Heart in Newark, NJ, Agnes was a devout Catholic her entire life, and was a dedicated disciple of the faith, relying always on her North stars in Mary and Jesus, sharing and demonstrating this faith with her family and friends in all that she did.

Agnes left so many indelible impressions of stalwart love, friendship, connection, devotion, commitment, dignity, truth, and light, as demonstrated by so many lives she touched and helped, not just among her siblings and offspring, but among so many others who saw, benefitted from and loved her for her quiet but boundless inner strength.

Agnes always had a special affection for children, and even in her last few years, as she suffered from short-term memory loss, her mind was keenly alert and aware of her own family and especially the children.

To order memorial trees or send flowers to the family in memory of Agnes Holl, please visit our flower store.