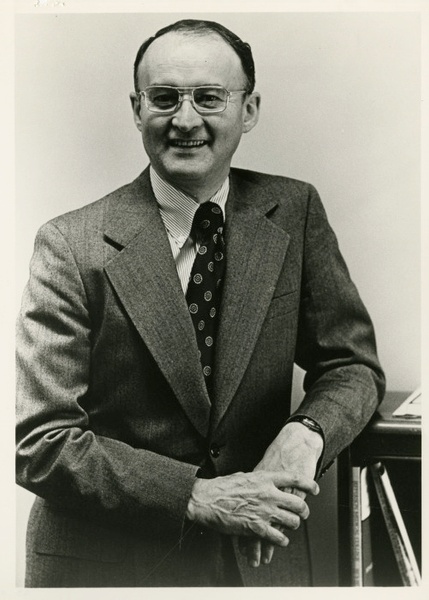 Lewis William “Bill” Bluemle, Jr., a distinguished scientist, educator, and physician, passed away on August 13, 2019 at his home in Bryn Mawr, Pennsylvania.  Born in 1921, in Williamsport, Pennsylvania, Bill was the son of Lewis William Bluemle, Sr., and Ora May Waltz Bluemle. Bill learned the value of a dollar during the Great Depression by working as a handyman for his father’s real estate business and spending his summers working at Bethlehem Steel.  Since childhood, Bill had wanted to become a doctor, but that aspiration vanished when he learned of the tuition costs. His hard work, good grades, and good cheer helped Bill become President of his senior class at Williamsport High School. Recognizing his diligence, aptitude and need, his high school principal recommended that Bill pursue higher education.  Bill’s life changed entirely when he was awarded a full scholarship to Johns Hopkins University.

After graduating from college in 1943, Bill became a private in the Army Specialized Training Corps and received his medical degree from Hopkins’ School of Medicine in 1946.  Following his internship and residency at the Hospital of the University of Pennsylvania, Dr. Bluemle returned to active duty as Assistant Director of the Hepatic and Metabolic Unit of the Valley Forge Army Hospital.  In 1951, he retired as a Captain and returned to the Hospital of the University of Pennsylvania where he developed the first successful dialysis unit in the Philadelphia area.

With a grant from the American Philosophical Society, Dr. Bluemle designed and constructed Philadelphia’s first successful artificial kidney, the third in the nation, which saved the lives of many.  In those early years, every hemodialysis was an exciting, unpredictable and often harrowing adventure for the patient and dialysis team alike. Fascinated by the potential advances of biomedical engineering, Dr. Bluemle became a charter member of the American Society for Artificial Organs, and a consultant to the National Institute of Health.  In subsequent years, he also designed and directed Penn’s first NIH-supported Clinical Research Center, and served as Associate Dean of Penn’s School of Medicine. He was recognized as an outstanding researcher and professor, becoming a Markle Scholar in Academic Medicine, and receiving the Lindback Award for Distinguished Teaching.

While working at Penn, Dr. Bluemle worked closely with fellow researcher, Dolores “Dee” Batdorf.  Their mutual interests in science and chemistry made them a great team, both in and out of the hospital.  They married in 1953 and went on to raise four children together.

Over the next four decades, Dr. Bluemle’s responsibilities grew in academic medicine.  He served as President of the Upstate Medical Center (SUNY) in Syracuse, New York from 1969 to 1974, and President of the University of Oregon's Health Science Center in Portland, Oregon from 1974 to 1977.  Dr. Bluemle returned to Philadelphia that year when he was inaugurated as the second president of Thomas Jefferson University.

His academic, research, and clinical appointments attracted top professionals to Jefferson, and the hospital achieved its status as a Level One Trauma Center during his tenure.  He also developed a strong and active board of trustees, expanded the board to include key Philadelphia leaders, and tripled Jefferson’s endowment. The Trustees’ annual report attributed much of Jefferson’s progress during Dr. Bluemle’s tenure to his “quiet, collegial style, always trying to develop a consensus among the major parties to any significant decision.”  Upon his retirement from Jefferson in 1990, Dr. Bluemle was named President Emeritus. He was further honored by the announcement that the university’s new research building would be named the Bluemle Life Sciences Building.

One of Dr. Bluemle’s greatest pleasures post-retirement was to join the Board of Trustees at the Connelly Foundation where he served as Senior Vice President for the last twenty-seven years- a position he proudly held until his death.  Being a part of the foundation’s altruistic mission brought him great fulfillment by allowing him to participate in a broad range of philanthropic support throughout the Philadelphia region.

Throughout his life, Dr. Bluemle was honored to receive both the Strittmatter Award from the Philadelphia County Medical Society, and the Distinguished Service Award for lifetime achievement in medicine from the Pennsylvania Medical Society.  He received honorary Doctor of Science degrees from the Philadelphia College of Pharmacy and Science, and the Medical College of Pennsylvania, and he was awarded an honorary Doctor of Humane Letters degree from Washington and Jefferson College.  In 1990, he was chosen by his beloved alma mater, Hopkins, to receive a Doctorate of Humane Letters, which described him as “one of the leading lights of professional health education in the United States...a craftsman of science and enduring relationships.”

Dr. Bluemle had a wide range of professional and civic appointments.  A fierce advocate for nuclear arms control, he was an advisory board member of the Philadelphia Chapter of the Physicians for Social Responsibility.  He served as President of the College of Physicians of Philadelphia and was a member of overseers of the Law School of the University of Pennsylvania.  He was also a member of the Orchestra Council of the Philadelphia Orchestra Association and the Mayor’s Business Roundtable. Other highlights include being appointed to the board of directors or trustees of the Association of Academic Health Centers, the University City Science Center, the Urban Affairs Partnership, Mellon Bank, Girard Bank, Teleflex Incorporated, the Greater Philadelphia First Corporation, and Waverly Heights.

For the past 40 years, Bill and Dee enjoyed restoring their historic home in Bryn Mawr, where he was the skilled craftsman, but she was definitely the boss. He particularly loved woodworking and was often mistaken for the handyman working on their house. The Bluemles ended their weeks together on Friday afternoons at the Philadelphia Orchestra and enjoyed vacationing with their children in Avalon, New Jersey.  After sixty-five years of marriage, Bill lost his beloved Dee in May of 2019.

In addition to his wife and parents, Bill was predeceased by his first three children, one sister, Elizabeth Hartung David, and one brother, Andrew Waltz Bluemle. He is survived by son Chris (wife Julia), daughters Lauren, Susan, and Amy (husband David), six grandchildren, and many nieces and nephews.

In lieu of flowers, contributions in his memory may be made to the College of Physicians of Philadelphia’s “Lewis W. ‘Bill’ Bluemle Jr., M.D., Education Center,” located at 19 S. 22nd Street, Philadelphia, PA 19103.

To order memorial trees or send flowers to the family in memory of Lewis Bluemle, M.D., please visit our flower store.