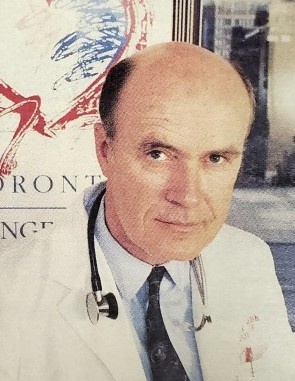 Born January 3rd, 1943 in Montreal, Quebec, he was the son of the late John Douglas Webb and the late Jeannie (Penny) Hardie Penman.

He leaves behind the love of his life and adoring wife of 41 years, Anne Michelle Phillips.  He was the much-loved father of Lindsay (Stephen), Geoffrey (deceased July 1, 2017 (Jacqueline), Laura (Adam), Natalie (Quinn), brother to Blair (Linda), Barbara (Steve, deceased 2020) and Ross (deceased 1978).  He was also a beloved fur father of Butters, Bueller and Tripp.  He passed away at home surrounded by his family after a valiant battle with brain cancer.

Gary graduated from McGill University in Montreal and after an internship at Royal Victoria Hospital he came to Toronto in 1968 for internal medicine and cardiology training.  He had staff positions first at Wellesley Hospital and then at Toronto General Hospital.  Among his early responsibilities he was director of post grad training in Cardiology.  He joined the Adult Congenital Heart Disease Program (ACHD) and took over as Director in 1986, a position he held until 2004, establishing a strong foundation of what became one of the largest and most influential programs in the world.

Gary either led or played a major role in essentially all of the early international conferences and guideline committees that shaped the future of ACHD.  He also edited one of the most important textbooks in ACHD, now in the 4th edition. He established the ACHD Learning Centre, now part of Heart University, and was Editor-in -Chief of the Congenital Heart International Professions’ (CHiP) Network.

In 2004, Gary left Toronto for Philadelphia, following his wife Anne, who took a senior executive position in the pharmaceutical industry.  He was the director of ACHD program at University of Pennsylvania until 2009, and then he moved on to establish the ACHD program at Cincinnati Children’s Hospital.  In 2017, he reactivated his Toronto appointment, and began again seeing Toronto ACHD patients and teaching Toronto ACHD followers.

Gary has been one of the pre-eminent pioneers in ACHD, a young subspecialty that owes much of its development to his personal vision and efforts.  His national and international reputation reflect the global impact of his leadership.  The future of the global ACHD community is built on his legacy.

While Gary had an incredibly impressive career, his greatest source of pride and sense of achievement came from his family, both immediate and extended.  His world was his family, and he was the bedrock of it. His two constant mantras to his family were “Work Hard, Play Hard” and “Be Good to Yourself, Be Good to Others”.

His focus was on time spent together, memories of wonderful family trips and extended family holidays on Shadow Lake and Gibson Lake in Ontario   He and his family returned to Toronto every Christmas to see both sides of his family, whom he loved more than anything. He was thrilled to just hang out, watch sports and movies, eat great soups, enjoy fabulous food and laugh. He also loved to watch his kids ’and nephews’ sporting events (hockey, rowing and lacrosse) He was an amazing hockey player growing up, and he loved to see how the kids and their teams progressed year over year.

Gary loved fun, and all the kids loved him.  He was like the Pied Piper – kids followed him blindly on whatever adventure he proposed- at the drop of a hat he’d take them go-karting, tubing on the lake and White Water Rafting, “Driving” the car (on his lap), rides on top of his shoulders, dizzying flips in his arms, all accentuated by his wild exclamations of “Hola- Bola” which he used as frequently as he possibly could .

Gary was a devoted husband, father and the quintessential family man. It bought him great joy to walk his daughter Laura down the aisle on April 10th, 2021 at her wedding to Adam. He loved family parties and the communal Sunday night family dinner was a tradition that continued until he passed.

Gary’s family was the pride and joy of his life.   He loved to laugh and had a great sense of humor.  Anne and Gary loved and laughed together throughout their wonderful life together.

Friends and relatives are invited to a drop in at 10am with his Memorial Service at 11am Eastern Time Saturday October 23rd at The Donohue Funeral Home, 366 West Lancaster, Wayne, PA 19087. The Memorial Service will be livestreamed at 11AM at https://vimeo.com/637216338 . Interment is private.

In lieu of flowers, we ask that you consider donating to the American Brain Tumor Association at: https://www.abta.org/

To order memorial trees or send flowers to the family in memory of Gary Webb, MD, FRCPC, FACC, please visit our flower store.